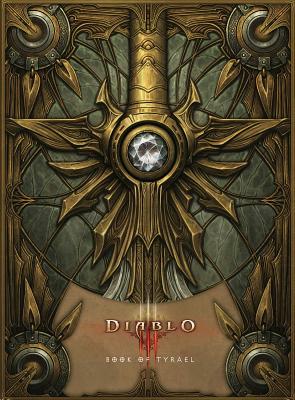 From Blizzard Entertainment, the makers of critically acclaimed games such as Warcraft®, StarCraft®, and Diablo® comes this exciting companion edition to Diablo III: Book of Cain, giving fans an in-depth look into the mind of Tyrael, a key character of the Diablo universe.

One of the most exciting and visceral action role-playing games in recent memory, Diablo® has become a worldwide gaming phenomenon. Diablo III: Book of Tyrael takes fans even further into the universe with a detailed and beautifully crafted artifact that focuses on the renowned champion Tyrael. As a former archangel of the High Heavens, he ranks among the most important and influential characters in the Diablo franchise. Here, in this illustrated and comprehensive tome, he reveals never-before-known secrets about the history of the world, the dark threats that yet face mankind, and his decision to join the ranks of humanity as a mortal. Featuring stunning original art throughout, this beautifully illustrated follow-up to Diablo III: Book of Cain will also feature letters from Leah and additional fragments of Cain’s writings, all curated by Tyrael as he weaves together a complex and fascinating story for the members of the Horadrim.

Tyrael, formerly the Archangel of Justice, now the Aspect of Wisdom, is a mortal angel —a maverick to the High Heavens, and a stalwart defender of Sanctuary, who opened the gateway to Harrogath and helped destroyed Mount Arreat.

Known for blockbuster hits including World of Warcraft® and the Warcraft®, StarCraft®, and Diablo® franchises, Blizzard Entertainment, Inc. is a premier developer and publisher of entertainment software renowned for creating some of the industry’s most critically acclaimed games. Blizzard Entertainment’s track record includes thirteen #1-selling games and numerous Game of the Year awards.
or support indie stores by buying on
Copyright © 2020 American Booksellers Association