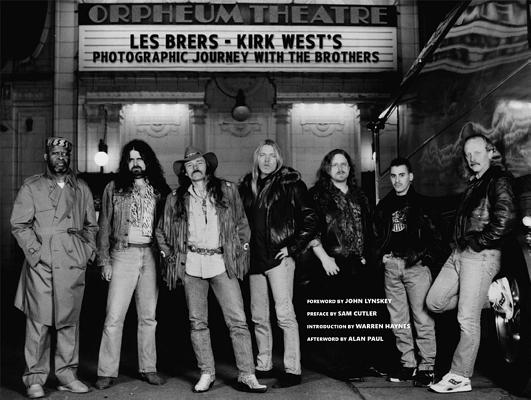 By Kirk West (By (photographer))

This oversized coffee-table book contains a collection that will stand the test of time as the definitive visual history of the Allman Brothers Band. As the Allman Brothers’ tour manager for more than twenty-five years and a photographer for more than forty, Kirk West was granted unprecedented access to the legendary band. West captured photos from every moment of the Allman Brothers’ history, including a series of unforgettable shots of the late Gregg Allman—founding father of Southern rock—and rare images of all the solo projects and side bands, both short-lived and hugely successful. Documenting the Brothers from 1973 to their final performance at New York’s Beacon Theatre in 2014, West’s photography captures intimate behind-the-scenes moments as well as the larger-than-life energy of their live performances. In addition to more than 350 images—all published here for the first time—Les Brers contains essays written by New York Times best-selling author Alan Paul (One Way Out: The Inside History of the Allman Brothers Band), former tour manager for the Rolling Stones and the Grateful Dead Sam Cutler, and Hittin’ the Note magazine publisher and editor John Lynskey, as well as a foreword by guitar legend Warren Haynes, offering an unprecedented glimpse at one of rock’s most celebrated and storied bands.

Kirk West is first and foremost a music lover. Beginning at age eighteen with his first concert shoot of Frank Zappa and the Mothers of Invention, West has built an archive of images taken over more than forty years, covering a wide range of music icons and cultural phenomena. He lives in Macon, GA.

"The book is packed with similar segments as West presents photographic memento after memento, documenting everything from MTV sessions to an appearance on "Late Night with David Letterman" to the band's gig at President Clinton's inaugural ball. "