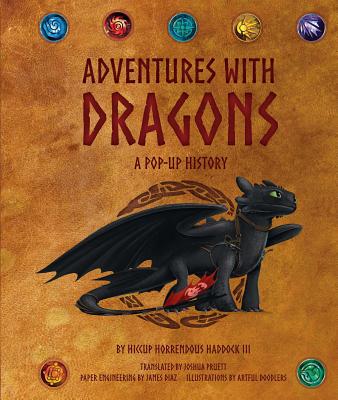 Adventures with Dragons: A Pop-Up History

Soar alongside the Viking heroes and their majestic dragons from all three of the DreamWorks Dragons films in this ingeniously crafted pop-up book.

Relive the enduring story of Hiccup and Toothless as they get to know each other on the Island of Berk, learn to trust and live harmoniously, and grow into fearless leaders. Pushing artistic boundaries to deliver a new type of immersive and engaging experience, DreamWorks Dragons: The Pop-Up Book invites you to explore dragon lore and peek inside the Hidden World from the upcoming film. Engage with six large pops, seven smaller pops, and a removable map woven into beautifully illustrated artwork just waiting to be explored.

This absorbing new dimension in pop-up books is sure to captivate both the collector and DreamWorks Dragons fans of all ages.

Joshua Pruett is a Primetime Emmy and Annie Award–nominated TV writer, author, and storyboard artist best known for his work on Mystery Science Theater 3000, Phineas and Ferb, and Disney XD’s Milo Murphy’s Law. His debut middle-grade book series Shipwreckers will launch in 2019. He is the author of The Jungle Book: The Strength of the Wolf Is the Pack, an adaptation of the 2016 live-action feature film.

James began his career as a paper engineer with Elgin Davis Studios. Learning from the ground-up, he has developed into one of America’s most accomplished Paper Engineers. From 1980 to 1989 James served as the Creative Director for Intervisual developing over 200 children’s pop-up and novelty books. In 1989 he founded White Heat, Ltd. which published and packaged over 300 hundred children’s novelty books, for such publishing giants as National Geographic, Random House, Simon and Schuster, Scholastic, Little Brown and Dutton Books to name a few. In 1999, James R. Diaz, along with David Carter authored and created “Elements of Pop Up: A Pop Up Book for Aspiring Paper Engineers,” which many art schools across America continue to use to this day as their primary textbook for teaching this highly skilled art form.

Praise For DreamWorks Dragons: Adventures with Dragons: A Pop-Up History…

“If you are a fan of DreamWorks Dragons like my family is, DreamWorks Dragons: Adventures With Dragons: A Pop Up History is a must have addition to your bookshelf. Because this book was so much fun to delve into exploring the illustrations and special effects, it has A Geek Daddy nod of approval. We especially enjoyed the paper engineering that lets readers shoot a catapult within the book's pages.”
— A Geek Daddy
or support indie stores by buying on
Copyright © 2020 American Booksellers Association