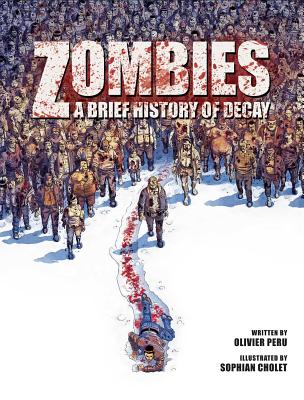 A Brief History Of Decay

A vivid and richly illustrated graphic novel, Zombies offers an action-packed tour through an apocalyptic vision of America.

Mankind is no longer at the top of the food chain. Zombies have taken their place, and nothing can stop them. Is this the end of humanity? Perhaps, but for some it is only the beginning.

Six billion living corpses are all that remains of civilization. Among the few survivors is Sam Coleman, a man who owes his salvation to Smith & Wesson and a little luck. Fleeing Seattle at the onset of the zombie outbreak, he was forced to leave his daughter behind. Yet now that silence has fallen over the city, he believes that she may still be alive. And his conscience serves up a constant reminder that to be human in this grim world is to have hope—and to keep fighting.

Olivier Peru is comic book writer, screenwriter, story boarder and designer for film and television. He has written several comic book series, including Zombies, Nosferatu, Mjöllnir, Lancelot, and The Orc War. His novels include the Martyrs trilogy, Les Haut-Conteurs, and Druid, which won both the 2011 Futuriales Festival Revelation Award and the 2013 Prix Imaginales des lycéens Award. In 2015, Peru also co-founded the transmedia writing studio Termites Factory. Their first novel, Darryl Ouvremonde by Olivier Peru, was launched through a crowdfunding campaign and succeeded with the second fastest record of all time, reaching their first goal €10,000 in just 13 minutes and 20 seconds.

Sophian Cholet grew up redrawing scenes from the television series V, Tintin, The Fair of Immortals, and Dragon Ball, and after discovering, Akira, Gunnm, and Spawn he became very passionate about fantasy films. Cholet studied animation at Studio M Academy with Thomas Debitus, a former layout artist for Disney, and spent two years training in animation, cartoons, illustration. He has worked on a number of animated short films, produced illustrations for magazines, and taught amateur cartoonists. In his second year of training, Cholet presented his first comic book project at the Angoulême Festival where he met Olivier Peru, and then later released his first comic book series, Zombies.
or
Not Currently Available for Direct Purchase
Copyright © 2020 American Booksellers Association