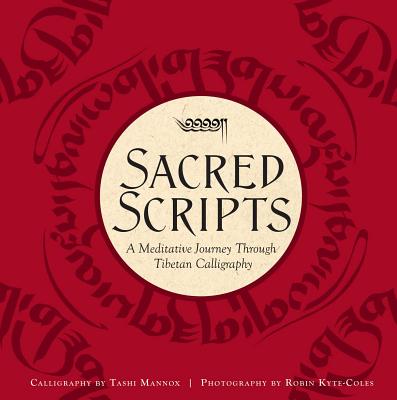 A Meditative Journey Through Tibetan Calligraphy

Insightful quotes written in Tibetan calligraphy are paired with photos of Buddhas from around the world to create this collection of timeless iconography.

Calligraphy has held an honored place in the spiritual traditions of Tibet. Monks dedicate their lives to mastering the many subtleties of the art, often spending years transcribing sacred Buddhist manuscripts. The carefully composed lines and deliberate spatial awareness in each work of calligraphy within Sacred Scripts encourage reflection, mindfulness, and meditation.

Within these pages, sacred mantras, seed syllables, and Buddhist quotes are presented in authentic Tibetan scripts. Photos of Buddha statues from around the world complement the calligraphy and create an ethereal mood of serenity. Addressing the stresses of our modern world and the demise of spiritual languages, Sacred Scripts provides insight and inspiration for attaining inner peace and well-being.

TASHI MANNOX committed to his monastic journey after graduating with a BA in Fine Art (Hons) at the age of twenty-two. He spent the next seventeen years as a monk. Tashi apprenticed under the direction of a master of Tibetan art, Sherab Palden Beru, and also studied under Lama Pema Lodrup, one of the last Tibetan masters of the rare Lantsha and Wartu Sanskrit forms. Since laying down his monastic robes in 2000, Tashi has built on his disciplined training and spiritual awareness to produce a collection of iconographic masterpieces that reveal powerful, sacred themes through the majestic images of Tibetan Buddhist iconography. Tashi is now recognized as one of the world’s foremost contemporary Tibetan calligraphy artists and exhibits internationally. To learn more, visit his website at www.tashimannox.com.

ROBIN KYTE-COLES has traveled extensively in South and Southeast Asia, capturing photographic images that reflect his deep interest in Buddhism and its teachings on compassion. His previous book, The Spirit of Buddha, was endorsed by His Holiness the Dalai Lama and took Kyte-Coles to remote spots in Vietnam, Laos, Cambodia, Thailand, Burma, Nepal, India, Tibet, and Sri Lanka.

Praise For Sacred Scripts: A Meditative Journey Through Tibetan Calligraphy…

"With it's exquisite calligraphy and magnificent photographs of Buddhist imagery, Sacred Scripts presents the refined and varied artistry of Tibetan calligraphers and artists of the past. The work portrayed in this fine volume reflects the great heights of aesthetic achievement attained by master artisans who considered their accomplishments to be offerings to the Buddha, Dharma and Sangha."

— His Holiness the Dalai Lama

“The collaborative output of both Tashi and Robin Kyte-Coles, a photographer specializing in images of the Buddha, it gives a great insight into a wealth of Buddhist wisdom, while making its own contribution to the tradition's continued preservation as well.”