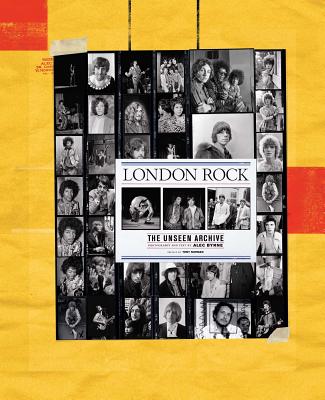 Tour the rock-and-roll scene of the '60s and '70s with some of the biggest bands from Britain and around the globe in this collection of Alec Byrne's stunning photography.

Through the 1960s and into the ’70s, young photographer Alec Byrne covered the exploding rock-and-roll scene in London. Legendary British artists—such as the Beatles, the Rolling Stones, Led Zeppelin, the Who, and David Bowie—roiled the capital to the core along with groundbreaking American musicians such as Chuck Berry, Jimi Hendrix, and the Doors. The vibrancy of Swinging London provided provocative fodder for the talented lensman, capturing the height of a cultural revolution. Byrne's resulting voluminous collection of rock-and-roll photos disappeared out of sight, kept in storage for the following forty years. This incredible archive is now presented for the first time in a gorgeous deluxe edition, enclosed in a lavishly designed case.

Through rare live performance images, intimate portraits, and candid captures of the scene, London Rock: The Unseen Archive brings the era into stunning focus, painting an evocative picture of an inimitable time and place.

"...all that music was a growing, unchallenged force of nature. These images are physical proof..."
— Graham Nash

ALEC BYRNE covered the rock and roll scene in London from the mid-1960s through the mid-1970s—the height of London’s rock revolution. After sitting in storage for close to four decades, this archive was reintroduced to the world in late 2012 with an acclaimed one-night show in Los Angeles attended by more than one thousand people. Since then, Byrne's work has been featured during the 2013 Rock and Roll Hall of Fame induction ceremony, exhibited at the South by Southwest music festival, and accepted into the National Portrait Gallery in London.
or
Not Currently Available for Direct Purchase