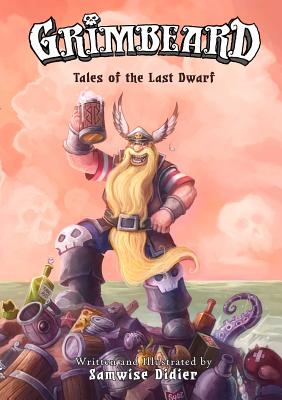 Tales of the Last Dwarf

Captain Grimbeard is right ticked off! Our most noble dwarf (and hero of this story) awoke from a night of merriment to find that he had mysteriously traveled one thousand years into the future. On top of that, he also discovered that the world he once knew was now ruled by the most detestable and dandyish of all creatures—those annoying elfs. Oh, and did I mention that every dwarf in existence was somehow wiped off the crust of the world by those aforementioned scoundrels?

Well, not every dwarf.

Praise For Grimbeard: Tales of the Last Dwarf…

"Grimbeard has something for everyone! A lavishly illustrated collection of adventures that is outrageous, irreverent, and quite often, downright enlightening."

— Micky Neilson, best-selling author of Ashbringer and Pearl of Pandaria

"Samwise Didier has outdone himself with this impressive display of both his artistic and literary skills. I've never been much of a dwarf guy, but the tenacious exploits of Samwise's endearing Grimbeard has won me over."

--Brom, award-winning author of Lost Gods, Krampus the Yule Lord, The Child Thief, The Plucker, and The Devil’s Rose

SAMWISE, a.k.a Sam Didier, is senior art director at Blizzard Entertainment. He joined the company in 1991 and is responsible for directing the art style for Warcraft, StarCraft, and Heroes of the Storm, as well as for creating artwork for World of Warcraft, Hearthstone, and Diablo.
Loading...
or
Not Currently Available for Direct Purchase