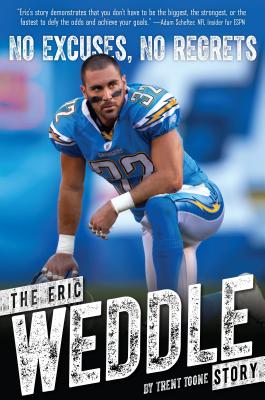 No Excuses, No Regrets

Live each day like it's your last. Play with heart. Dream big. Never give up.

For Eric Weddle, such mottos apply not only to how he plays football, but how he lives his life.

From his childhood days of playing in Little League baseball and Pop Warner football games to playing under the bright lights in NFL stadiums across the country, Eric has lived by a code of honor and integrity. He has always looked forward to the next challenge, eager to test himself against it, and prove himself the victor.

To get better today, you must demand more than you did yesterday. Winners pay the price to reach their goals. Eric was willing to pay that price. Recruited to play at the University of Utah, Eric worked hard to make his dream of playing in the NFL a reality and was ultimately drafted by the San Diego Chargers.

Weddle's story is about overcoming stereotypes and adversity and accomplishing impossible dreams. It's about an athlete who surprised his family and friends by joining a church they knew little about and about how his faith in Jesus Christ has continued to bless his life. It's a story about epic wins and devastating losses, confidence and character, taking advantage of opportunities, and respecting the game of football. It's a story of a man who values his family above all else. It's about living each day with no excuses and no regrets.

Trent Toone is a journalist for the "Deseret News," where he writes for a variety of feature sections. He has worked for several newspapers and received several awards over his fifteen-year journalism career. Trent and his wife and three children live in Utah.
Loading...
or
Not Currently Available for Direct Purchase