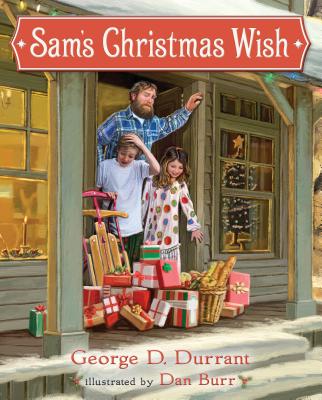 Sam Edwards isn't looking forward to Christmas, at least not this year. Since losing his job six months before, he hasn't had any luck in finding a new one. He isn't sure how he can give his family a merry Christmas, and the last thing he wants is charity from his neighbors. But when he falls asleep in his living room with his shotgun across his lap just to make sure no one attempts to visit him he wakes up to find his front porch laden with Christmas goodies. But when he tries to find out who left the presents, the freshly fallen snow reveals no footprints. Years later, Sam's wife has passed away and his children are grown. Old and sick, Sam remembers the kindness of the anonymous stranger from long ago and wishes for an opportunity to bless another's life. So on Christmas Eve, when he sees his neighbor's house on fire, he hopes that he can be the means for another anonymous miracle. Sam's Christmas Wish is a story of love, service, and sacrifice.

George D. Durrant was born and raised in American Fork, Utah. He graduated from Brigham Young University and became a full-time educator. He is a master storyteller and loves telling stories to his eight children, thirty-four grandchildren, and fifteen great-grandchildren. He and his wife live in Utah. Dan Burr earned his bachelor of fine arts degree from Utah State University and a master's degree in illustration from Syracuse University. He and his family and numerous farm animals live in Tetonia, Idaho. Dan is a well-known Christian illustrator who also specializes in wildlife renderings. Dan has illustrated The Miracle of the Wooden Shoes, I Heard the Bells on Christmas Day, and The Mansion.
Loading...
or
Not Currently Available for Direct Purchase