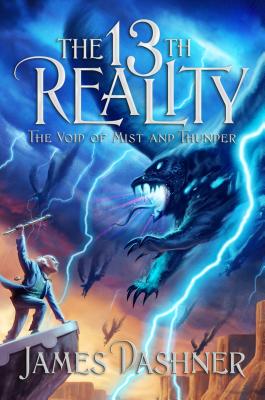 The Void of Mist and Thunder

Atticus Higginbottom is trapped in the Nonex with his mortal enemy Mistress Jane and the corrupt and powerful Mr. Chu. No one has ever escaped the Nonex before, but for Tick, Jane, or Mr. Chu to have any hope of surviving the dangerous and deadly realm, they will have to work together for the first time in their lives. And they must escape. An all-consuming void has opened up and is unleashing monsters throughout the Realities. All of reality is unraveling at the seams and Tick's friends and fellow Realitants are facing an epic war that could spell the end of all they hold dear. Master George has one last weapon at his disposal: the mysterious and unpredictable Karma button. And depending on the character of the person who wields it will determine if its unlimited power is used for good or for evil.

James Dashner is a New York Times bestselling author. He was born and raised in a small town in Georgia, surrounded by a creepy forest that provided many ideas for stories later on in life. He lives in the snow-swept mountains in the West with his wife and four children.
Loading...
or
Not Currently Available for Direct Purchase