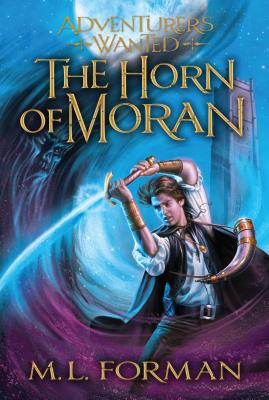 The land of Alusia is on the brink of war as two men have each claimed the throne. Only the true king can sound the Horn of Moran and prove his nobility. But the Horn has been lost for years. If it is not found -- and soon -- it could mean the destruction of an entire nation.

It wasn't that long ago that young Alexander Taylor embarked on his first adventure, where he discovered he was a wizard and destroyed the fearsome dragon, Slathbog. Now he joins a band of seasoned adventurers who have been called up to retrieve the legendary Horn of Moran.

Their journey to the mysterious Tower of the Moon will take them through an enchanted forest, into battle against a goblin army, past the watchful eyes of griffin guards, and face-to-face with a sphinx and her deadly riddles.

With his sword, Moon Slayer, and the wise counsel of his wizard mentor, Whalen Vankin, Alex must use all his wizard and warrior skills to fight a darkness that may consume them all.

M. L. Forman lives in the foothills of the western Rockies. He tries to write as much as possible while still attending to his many other hobbies, such as fishing, camping, hiking, and almost anything that will allow him to enjoy the magic of nature. He is the author of the Adventurers Wanted series.
Loading...
or support indie stores by buying on