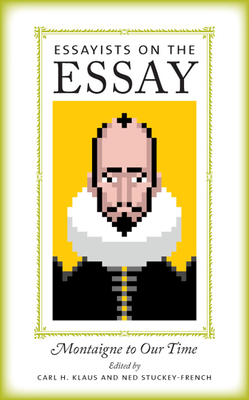 Essayists on the Essay

Montaigne to Our Time

The first historically and internationally comprehensive collection of its kind, Essayists on the Essay is a path-breaking work that is nothing less than a richly varied sourcebook for anyone interested in the theory, practice, and art of the essay. This unique work includes a selection of fifty distinctive pieces by American, Canadian, English, European, and South American essayists from Montaigne to the present—many of which have not previously been anthologized or translated—as well as a detailed bibliographical and thematic guide to hundreds of additional works about the essay.

From a buoyant introduction that provides a sweeping historical and analytic overview of essayists’ thinking about their genre—a collective poetics of the essay—to the detailed headnotes offering pointed information about both the essayists themselves and the anthologized selections, to the richly detailed bibliographic sections, Essayists on the Essay is essential to anyone who cares about the form.

This collection provides teachers, scholars, essayists, and readers with the materials they need to take a fresh look at this important but often overlooked form that has for too long been relegated to the role of service genre—used primarily to write about other more “literary” genres or to teach young people how to write. Here, in a single celebratory volume, are four centuries of commentary and theory reminding us of the essay’s storied history, its international appeal, and its relationship not just with poetry and fiction but also with radio, film, video, and new media.


Praise For Essayists on the Essay: Montaigne to Our Time…

“Carl H. Klaus and Ned Stuckey-French have provided an informative guide to how the genre of the essay has been conceptualized and conventionalized in literary history. As this capacious collection of excerpts demonstrates, no genre has more potential to chart the meandering possibilities of thought in action, especially when the essay thinks itself.”—Charles Bernstein, author, Attack of the Difficult Poems: Essays and Inventions

“Carl Klaus and Ned Stuckey-French are among the finest commentators of the genre today. Their presentation of the material is compelling and, in my opinion, will be extremely valuable to us all—we teachers, writers, critics, and educated readers who remain devoted to furthering the study of the essay.”—Robert Atwan, series editor, Best American Essays

“At long last, a book that collects critical ideas—from the minds of essay practitioners—about the oft-maligned yet exquisite literary adventure that is the essay. Not only does this anthology document the history of the essay, but it also provides guidance, via an extensive thematic guide, to the study of this form. Teachers, students, essayists, and essay enthusiasts will want this volume on their shelves. Bravo to Carl Klaus and Ned Stuckey-French for this superb endeavor.”—Kim Dana Kupperman, author, I Just Lately Started Buying Wings: Missives from the Other Side of Silence

Carl H. Klaus, founding director of Iowa’s Nonfiction Writing Program, is professor emeritus at the University of Iowa and coeditor (with Patricia Hampl) of Sightline Books: The Iowa Series in Literary Nonfiction. His widely praised nonfiction includes most recently The Made-Up Self: Impersonation in the Personal Essay (Iowa, 2010), as well as My Vegetable Love (Iowa paperback 2000), its companion Weathering Winter (Iowa, 1997), Taking Retirement: A Beginner’s Diary and Letters to Kate: Life after Life (Iowa, 2006). Ned Stuckey-French is an assistant professor in the Department of English at Florida State University. He is the author of The American Essay in the American Century, a study of personal essays, magazine culture and class construction. His reviews and critical work have appeared in journals such as American Literature, the CEA Critic, Modern Fiction Studies, middlebrow, culturefront, and the Iowa Review. He is the book review editor for Fourth Genre: Explorations in Nonfiction.