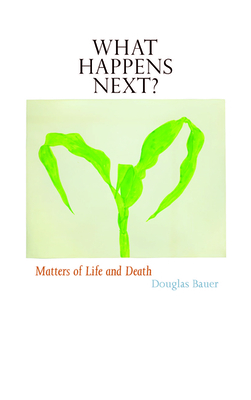 Matters of Life and Death (Iowa and the Midwest Experience)

What is life about but the continuous posing of the questions: what happens next, and what do we make of it when it arrives? In these highly evocative personal essays, Douglas Bauer weaves together the stories of his own and his parents’ lives, the meals they ate, the work and rewards and regrets that defined them, and the inevitable betrayal by their bodies as they aged.
His collection features at its center a long and memory-rich piece seasoned with sensory descriptions of the midday dinners his mother cooked for her farmer husband and father-in-law every noon for many years. It’s this memoir in miniature that sets the table for the other stories that surround it—of love and bitterness, of hungers served and denied. Good food and marvelous meals would take on other revelatory meanings for Bauer as a young man, when he met, became lifelong friends with, and was tutored in the pleasures of an appetite for life by M. F. K. Fisher, the century’s finest writer in English on “the art of eating,” to borrow one of her titles.
The unavoidable companion of the sensual joys of food and friendship is the fragility and ultimately the mortality of the body. As a teenager, Bauer courted sports injuries to impress others, sometimes with his toughness and other times with his vulnerability. And as happens to all of us, eventually his body began to show the common signs of wear—cataracts, an irregular heartbeat, an arthritic knee. That these events might mark the arc of his life became clear when his mother, a few months shy of eighty-seven, slipped on some ice and injured herself.
In these clear-eyed, wry and graceful essays, Douglas Bauer presents with candor and humor the dual calendars of his own mortality and that of his aging parents, evoking the regrets and affirmations inherent in being human.

Praise For What Happens Next?: Matters of Life and Death (Iowa and the Midwest Experience)…

"These are some of the finest, if not the finest, personal essays I have ever read. With exacting and exquisite prose, Douglas Bauer achieves the truly remarkable here: he plumbs the heart of his midwestern family with brave and naked fairness, rendering his own mortality with a steadfastly clear-eyed and life-loving attention to all that is essential, our shared human frailty and resilience and those tangled but lasting ties that bind. What Happens Next? Matters of Life and Death is a masterful, soul-nourishing work, and I simply cannot recommend it highly enough."—Andre Dubus III, author, Townie: A Memoir

“This remarkable memoir-in-essays respects time but is not enslaved to it. Bauer moves in circular fashion among incidents that foreshadow later ones and recall earlier. It’s not a linear but a spiral history, which touches us and then touches again. As for the language: in each sentence each word seems the only possible choice. How easily the prose lets us read it; what artistic intensity made it that way.”—Edith Pearlman, author, Binocular Vision, winner of the 2012 National Book Critics Circle Award

"A routine medical procedure is the starting point of this beautiful and original book of essays in which Douglas Bauer threads the story of his physical self in and out of the remembered and reconstructed past. The result is a gorgeous meditation on history, mortality, and love."—Ann Packer, author, Swim Back to Me

“In What Happens Next? Doug Bauer circles his own life, that of the farm boy who discovers cities, and those of his parents who didn't, with piercing intelligence and lucidity. Whether he's describing snow in Iowa or oysters in New Orleans, Bauer is a master of the telling detail. This is a beautiful book about mortal matters and the great lessons of time that are written on the body.”—Margot Livesey, author, The Flight of Gemma Hardy

"Douglas Bauer's prose is as bracing as clear, cold water, its depths stunningly visible from the surface. What Happens Next? is a work of extraordinary empathy and great art."—Bernard Cooper

Douglas Bauer is the author of several books, including Prairie City, Iowa: Three Seasons at Home (Iowa, 2008), The Stuff of Fiction: Advice on Craft, and three novels, Dexterity, The Very Air, and The Book of Famous Iowans. His edited works include Death by Pad Thai and Other Unforgettable Meals and Prime Times: Writers on Their Favorite Television Shows. Named the Public Library Foundation of Iowa’s Outstanding Writer in 2003, he has also won grants from the National Endowment for the Arts in both fiction and creative nonfiction. He lives in Boston and teaches literature at Bennington College.
Loading...
or support indie stores by buying on