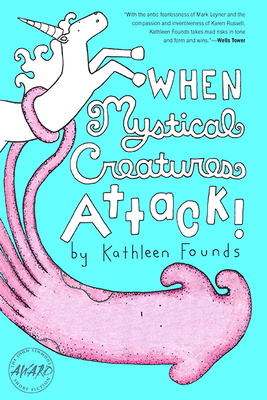 In When Mystical Creatures Attack!, Ms. Freedman’s high school English class writes essays in which mystical creatures resolve the greatest sociopolitical problems of our time. Students include Janice Gibbs, “a feral child with excessive eyeliner and an anti-authoritarian complex that would be interesting were it not so ill-informed,” and Cody Splunk, an aspiring writer working on a time machine. Following a nervous breakdown, Ms. Freedman corresponds with Janice and Cody from an insane asylum run on the capitalist model of cognitive-behavioral therapy, where inmates practice water aerobics to rebuild their Psychiatric Credit Scores.

The lives of Janice, Cody, and Ms. Freedman are revealed through in-class essays, letters, therapeutic journal exercises, an advice column, a reality show television transcript, a diary, and a Methodist women’s fundraising cookbook. (Recipes include “Dark Night of the Soul Food,” “Render Unto Caesar Salad,” and “Valley of the Shadow of Death by Chocolate Cake.”) In “Virtue of the Month,” the ghost of Ms. Freedman’s mother argues that suicide is not a choice. In “The Un-Game,” Janice’s chain-smoking nursing home charge composes a dirty limerick. In “The Hall of Old-Testament Miracles,” wax figures of Bible characters come to life, hungry for Cody’s flesh.

Set against a South Texas landscape where cicadas hum and the air smells of taco stands and jasmine flowers, these stories range from laugh-out-loud funny to achingly poignant. This surreal, exuberant collection mines the dark recesses of the soul while illuminating the human heart.

"With the antic fearlessness of Mark Leyner and the compassion and inventiveness of Karen Russell, Kathleen Founds takes mad risks in tone and form and wins. These hilarious, heartbreaking stories build a new architecture between the novel and the postmodern parable, revising our notions of what the short story is and might be."—Wells Tower


"Kathleen Founds is a comic genius, and few comic writers can deliver such wisdom and pathos along with the laughs. Her characters are unforgettable, in part because they are so original, and in part because they so poignantly resemble ourselves. Hers is a voice that will resonate long after you've stopped laughing."—Mary Caponegro


"I first encountered these mystical animals when Kathleen Founds was in my writing class many years ago. I approached them with my pencil gripped firmly in hand, ready to analyze and criticize. The next thing I knew, I was doodling in the margins of her story, actually drawing hearts and flowers all over it. I couldn't stop myself! I still don't know what happened; it was a very mystical and magical attack! All I can say is read this book and let it happen to you!"­—Mary Gaitskill


“When Mystical Creatures Attack! is a collection of stories that reads like a dazzling, intricate, and electric novel. Kathleen Founds shows a true empathy toward these memorable characters, and I felt incredibly attached to them. Founds is a wonderful new talent, and her prose and voice are incredibly charming, witty, and stirringly graceful.”—Tom Kealey, Thieves I’ve Known


"Kathleen Founds is a luminous, bright, subversive and very funny writer.  What I especially love about her work is the sense that her strange and wonderful talent is always working in the service of a deeply humane and hopeful vision of the world."—George Saunders

Kathleen Founds has worked at a nursing home, a phone bank, a South Texas middle school, and a Midwestern technical college specializing in truck-driving certificates. She got her undergraduate degree at Stanford and her MFA at Syracuse. She teaches social justice themed English classes at Cabrillo College and lives in Marina, California, where she writes while her toddler is napping. Her fiction has been published in The Sun, Epiphany,Booth Journal, The MacGuffin, and Stanford Alumni Magazine.
Loading...
or
Not Currently Available for Direct Purchase