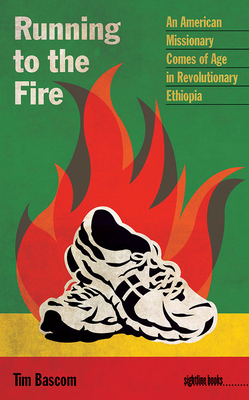 Running to the Fire

In the streets of Addis Ababa in 1977, shop-front posters illustrate Uncle Sam being strangled by an Ethiopian revolutionary, parliamentary leaders are executed, student protesters are gunned down, and Christian mission converts are targeted as imperialistic sympathizers. Into this world arrives sixteen-year-old Tim Bascom, whose missionary parents have brought their family from a small town in Kansas straight into Colonel Mengistu’s Marxist “Red Terror.” Here they plan to work alongside a tiny remnant of western missionaries who trust that God will somehow keep them safe.

Running to the Fire focuses on the turbulent year the Bascom family experienced upon traveling into revolutionary Ethiopia. The teenage Bascom finds a paradoxical exhilaration in living so close to constant danger. At boarding school in Addis Ababa, where dorm parents demand morning devotions and forbid dancing, Bascom bonds with other youth due to a shared sense of threat.  He falls in love for the first time, but the young couple is soon separated by the politics that affect all their lives. Across the country, missionaries are being held under house arrest while communist cadres seize their hospitals and schools. A friend’s father is imprisoned as a suspected CIA agent; another is killed by raiding Somalis.

Throughout, the teenaged Bascom struggles with his faith and his role within the conflict as a white American Christian missionary’s child. Reflecting back as an adult, he explores the historical, cultural, and religious contexts that led to this conflict, even though in doing so he is forced to ask himself questions that are easier left alone. Why, he wonders, did he find such strange fulfillment in being young and idealistic in the middle of what was essentially a kind of holy war?

Praise For Running to the Fire: An American Missionary Comes of Age in Revolutionary Ethiopia (Sightline Books)…

“In this fascinating, nuanced memoir rife with contrasts and longing, Bascom employs dual voices—one to capture the intensity and uncertainty of his youth in revolutionary 1970s Ethiopia, another to explore his adult ambivalence toward Christian missionaries (like his beloved parents), Evangelical Protestantism, Marxism in Ethiopia, and westerners in Africa.”—Faith Adiele, author, The Nigerian-Nordic Girl’s Guide to Lady Problems

Tim Bascom is the author of the novel Squatters’ Rites, the essay collection The Comfort Trap, and the memoir Chameleon Days: An American Boyhood in Ethiopia, which won the Bakeless Literary Prize in Nonfiction. Excerpts from Chameleon Days won the Editor’s Prize from The Missouri Review and were included in The Best American Travel Writing. Bascom is an MFA graduate of the Nonfiction Writing Program at the University of Iowa and has published in an array of literary journals and commercial magazines, including North American Review, Witness, Creative Nonfiction, and The Christian Science Monitor. He is currently the Director of Creative Writing at Waldorf College and lives in Forest City, Iowa.
Loading...
or
Not Currently Available for Direct Purchase