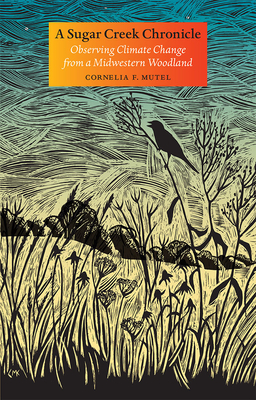 In 2010, while editing a report on the effects of climate change in Iowa, ecologist Cornelia Mutel came to grips with the magnitude and urgency of the problem. She already knew the basics: greenhouse gas emissions and global average temperatures are rising on a trajectory that could, within decades, propel us beyond far-reaching, irreversible atmospheric changes; the results could devastate the environment that enables humans to thrive. The more details she learned, the more she felt compelled to address this emerging crisis. The result is this book, an artful weaving together of the science behind rising temperatures, tumultuous weather events, and a lifetime devoted to the natural world. Climate change isn’t just about melting Arctic ice and starving polar bears. It’s weakening the web of life in our own backyards.

Moving between two timelines, Mutel pairs chapters about a single year in her Iowa woodland with chapters about her life as a fledgling and then professional student of nature. Stories of her childhood ramblings in Wisconsin and the solace she found in the Colorado mountains during early adulthood are merged with accounts of global environmental dilemmas that have redefined nature during her lifespan. Interwoven chapters bring us into her woodland home to watch nature’s cycles of life during a single year, 2012, when weather records were broken time and time again. Throughout, in a straightforward manner for a concerned general audience, Mutel integrates information about the science of climate change and its dramatic alteration of the planet in ways that clarify its broad reach, profound impact, and seemingly relentless pace.

It is not too late, she informs us: we can still prevent the most catastrophic changes. We can preserve a world full of biodiversity, one that supports human lives as well as those of our myriad companions on this planet. In the end, Mutel offers advice about steps we can all take to curb our own carbon emissions and strategies we can suggest to our policy-makers.

“This is a rich and astute story of balance, stability, and their opposites, in the life of a person and of a planet. It helps set the great changes now underway around us in a powerful, manageable context. I highly recommend it.”—Bill McKibben, author, Eaarth: Making a Life on a Tough New Planet


“A Sugar Creek Chronicle is as well-researched as it is written. Climate change is already hitting home. Connecting the dots to the underlying science is often difficult. Mutel does just that, and does it superbly.”—Gernot Wagner, coauthor, Climate Shock: The Economic Consequences of a Hotter Planet

Ecologist Cornelia F. Mutel is the author of Fragile Giants: A Natural History of the Loess Hills (Iowa, 1989) and The Emerald Horizon: The History of Nature in Iowa (Iowa, 2008) and the editor of A Watershed Year: Anatomy of the Iowa Floods of 2008 (Iowa, 2010), among many other books. She is senior science writer at IIHR–Hydroscience & Engineering at the University of Iowa College of Engineering. She lives in rural Iowa City, Iowa.
Loading...
or
Not Currently Available for Direct Purchase