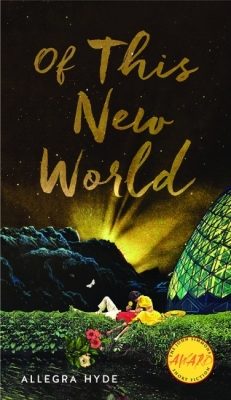 Of This New World offers a menagerie of utopias: real, imagined, and lost. Starting with the Garden of Eden and ending in a Mars colony, the stories wrestle with conflicts of idealism and practicality, communal ambition and individual kink. Stories jump between genres—from historical fiction to science fiction, realism to fabulism—but all ask that fundamental human question: is paradise really so impossible?

Over the course of twelve stories, Hyde writes with a mix of lyricism, humor, and masterful detail. A group of environmental missionaries seeks to start an ideal eco-society on an island in The Bahamas, only to unwittingly tyrannize the local inhabitants. The neglected daughter of a floundering hippie commune must adjust to conventional life with her un-groovy grandmother. Haunted by her years at a collegiate idyll, a young woman eulogizes a friendship. After indenturing his only son to the Shakers, an antebellum vegan turns to Louisa May Alcott’s famous family for help. And in the final story, a former drug addict chases a second chance at life in a government-sponsored space population program. An unmissable debut, the collection charts the worlds born in our dreams and bred in hope.

Praise For Of This New World (Iowa Short Fiction Award)…

“Smart, stylish, and surprising, Of This New World is an inventive compendium of paradises lost. Starting with a married couple expelled from a certain unnamed garden, the collection charts the journeys of assorted outcasts, drifters, hippies, and astronauts as they set out to find their personal utopias, whether at an ‘eco-revolution’ boot camp in the Bahamas, a Shaker community in nineteenth-century America, or a colony on Mars. In stories that range fearlessly across space, time, and genre, Allegra Hyde keeps pursuing new variations on the collection’s major theme. The result is an ambitious and memorable debut, in which a dozen different characters, looking for a dozen different paradises, all end up learning some customized version of that ultimate Miltonic lesson: ‘the mind is its own place, and in itself can make a heaven of hell, a hell of heaven.’”—Bennett Sims, 2016 judge, 2016 John Simmons Short Fiction Award

“Of This New World is the right title for a collection that’s so witheringly deadpan and compassionate about who we are now. From Adam and Eve to an uprooted flower child to a maimed veteran to a Mexican domestic to a hapless glue-sniffing colonist on Mars, these protagonists are runaways and spirit-seekers who know the power of mystery and license and desire, and believe in resistance and in living the solution and the willingness to dream, even as they confront their own unfulfilled promise. Having learned detachment as a survival strategy, they acknowledge a love that always stops short of fulfillment but remains exhilarating nonetheless.”—Jim Shepard, author, The Book of Aron

“With rare style, refined mischief, and a fearless spirit of philosophic and scientific inquiry, the twelve stories in Allegra Hyde’s Of This New World brilliantly orbit our longing for paradise, our ache for some elusive perfection within the human community. Whether these utopian yearnings are miscarried into outer space, nearly extinguished by the stringent rules of a nineteenth-century Shaker community, or demoralized by an eco-experiment on an island named after the Greek word for freedom, each fragile, idealized construct shares a common hope for harmony, as well as a doomed instinct to replace the anxiety of existence with an illusion of immaculate form.”—Melissa Pritchard, author, Palmerino and A Solemn Pleasure: To Imagine, Witness, and Write

“Allegra Hyde is a talented ventriloquist, gifting each of her stories its own compelling voice, full of history and science, myth and folklore, humor and heart. But behind every façade lie Hyde’s unmistakable talent, her inventive imagination and her joyful play with language. This is a great debut, not to be missed.”—Matt Bell, author, Scrapper

“These extraordinary stories illuminate our hunger for utopias both earthly and transcendent, and the sometimes dangerous lure of love. In Of This New World, Allegra Hyde writes with a genius scientist’s impassioned inquiry, and a poet’s lyrical, exquisite precision.”—Tara Ison, author, Ball: Stories

Allegra Hyde’s stories have appeared in the Missouri Review, New England Review, Alaska Quarterly Review, the Gettysburg Review, and the Pushcart Prize XL: Best of the Small Presses. She lives in Peterborough, New Hampshire.
Loading...
or
Not Currently Available for Direct Purchase