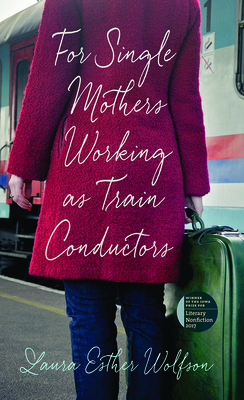 Laura Esther Wolfson’s literary debut draws on years of immersion in the Russian and French languages; struggles to gain a basic understanding of Judaism, its history, and her place in it; and her search for a form to hold the stories that emerge from what she has lived, observed, overheard, and misremembered.

In “Proust at Rush Hour,” when her lungs begin to collapse and fail, forcing her to give up an exciting and precarious existence as a globetrotting simultaneous interpreter, she seeks consolation by reading Proust in the original while commuting by subway to a desk job that requires no more than a minimal knowledge of French. In “For Single Mothers Working as Train Conductors” she gives away her diaphragm and tubes of spermicidal jelly to a woman in the Soviet Union who, with two unwanted pregnancies behind her, needs them more than she does. “The Husband Method” has her translating a book on Russian obscenities and gulag slang during the dissolution of her marriage to the Russian-speaker who taught her much of what she knows about that language.

In prose spangled with pathos and dusted with humor, Wolfson transports us to Paris, the Republic of Georgia, upstate New York, the Upper West Side, and the corridors of the United Nations, telling stories that skewer, transform, and inspire.

“This book is about many things: love, language, love of language, the meaning of home and country and family. Mostly, though, it’s about the subtle, perennial tensions between the lives we think we want and the lives we actually make. For Single Mothers Working as Train Conductors is poignant, sophisticated, and as soulful as it is brainy. I admire it immensely.”—Meghan Daum, judge, Iowa Prize for Literary Nonfiction, author, The Unspeakable: And Other Subjects of Discussion

“Laura Esther Wolfson’s first collection is one of the most accomplished and inviting debuts of a personal essayist in years. She has translated, in effect, her psyche and those she encounters with rueful honesty for our reading pleasure. I found it a real page-turner.”—Phillip Lopate, author, Against Joie de Vivre

“A woman sits musing on all she has lived through—her two marriages, her lifelong desire to write, her relation to the Russian language, the lung disease that is slowly overpowering her. Searching for the right distance from which to make large sense of it all, she adopts a tone of voice that is richly reflective of all that has gone before. This voice lives on in the reader’s mind long after the last page of For Single Mothers Working as Train Conductors—an unusually stirring memoir—has been turned.”—Vivian Gornick, author, Fierce Attachments


“Set variously in America, France, and the former Soviet Union, these interlinked stories have a certain magic about them. They speak of loss and disappointment, of foiled ambitions and failed marriages. And yet there is something uplifting about them—owing no doubt to the author’s reserves of talent and wisdom.”—Daphne Merkin, author, The Fame Lunches

“This is a marvelous collection. What lifts it so far above the usual offerings is something I can only call soulfulness. Wolfson’s prose is like strong Russian tea; it has a depth of flavor that only a long, devoted steeping in life and literature can produce.”—Emily Fox Gordon, author, Mockingbird Years