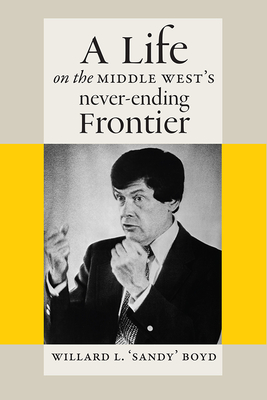 A Life on the Middle West's Never-Ending Frontier

University of Iowa legend Willard L. “Sandy” Boyd is a proud middle westerner. His decades of service to the university began in 1954, when he arrived as a law professor. He later became president of the University of Iowa from 1969 to 1981, and led the school through times that were fraught not just for the university but for the country. During the intense polarization of the late sixties and early seventies, Sandy’s compassion and steady leadership ensured that dissent on campus would be honored and would not stop the university’s educational mission. He quickly became admired, not simply for his professional achievements but also for his personal integrity.

His memoir, interspersed with personal wisdom gleaned over more than six decades of service and leadership, encapsulates Sandy’s shrewd yet optimistic view of the public university as an institution. At every stage in his life—in the U.S. Navy during World War II, while practicing law or teaching, and in leadership positions at Chicago’s Field Museum and the University of Iowa— Sandy relied on his principles of open disclosure, inclusiveness, and respect for differences to guide him on issues that matter.

This chronicle of Sandy’s experiences throughout his life shows us the evolution both of the University of Iowa and of the nation writ large. More importantly, this book gives us a lens through which to examine our present situation, whether debating free speech on campus, the role of the arts and humanities in civil society, or the importance of funding for educational and cultural institutions.

Willard L. “Sandy” Boyd first came to the University of Iowa as a law professor, and eventually became the university’s fifteenth president from 1969 to 1981, when he left to become president of the Field Museum of Natural History in Chicago. He returned to UI as a law professor in 1996 and served as interim president from 2002 to 2003. He is also founder of the university’s Nonprofit Resource Center. Sandy lives in Iowa City.
Loading...
or
Not Currently Available for Direct Purchase