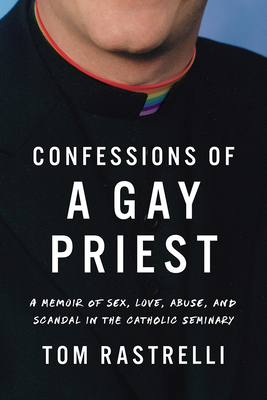 Confessions of a Gay Priest

A Memoir of Sex, Love, Abuse, and Scandal in the Catholic Seminary

Tom Rastrelli is a survivor of clergy-perpetrated sexual abuse who then became a priest in the early days of the Catholic Church’s ongoing scandals. Confessions of a Gay Priest divulges the clandes­tine inner workings of the seminary, providing an intimate and unapologetic look into the psychosexual and spiritual dynamics of celibacy and lays bare the “formation” system that perpetuates the cycle of abuse and cover-up that continues today.

Under the guidance of a charismatic college campus minister, Rastrelli sought to reconcile his homosexuality and childhood sexual abuse. When he felt called to the priesthood, Rastrelli be­gan the process of “priestly discernment.” Priests welcomed him into a confusing clerical culture where public displays of piety, celibacy, and homophobia masked a closeted underworld in which elder priests preyed upon young recruits.

From there he ventured deeper into the seminary system seeking healing, hoping to help others, and striving not to live a double life. Trained to treat sexuality like an addiction, he and his brother seminarians lived in a world of cliques, competition, self-loathing, alcohol, hidden crushes, and closeted sex. Ultimately, the “for­mation” intended to make Rastrelli a compliant priest helped to liberate him.


Praise For Confessions of a Gay Priest: A Memoir of Sex, Love, Abuse, and Scandal in the Catholic Seminary…

“In demanding celibacy and damning homosexuality, the Catholic Church condemns legions of its best and brightest priests to lives of hypocrisy and shame. Rastrelli recounts his struggle with heart, wit, and courage. The Church’s loss is literature’s gain.”—Mary Roach, author, Grunt: The Curious Science of Humans at War

“Tom Rastrelli is a gifted writer whose personal journey is in­sightful and enormously important. Confessions of a Gay Priest is a riveting, powerful book, rich in detail and deeply relevant to the times we live in. It exposes painful truths that must be told. Read it.”—Michelangelo Signorile, author, It’s Not Over: Getting Beyond Tolerance, Defeating Homophobia, and Winning True Equality

“Tom Rastrelli is that unique blend of courage and talent, a remarkable personal story to tell, a passionate voice, and a sharp, skillful pen with which to fashion the tale.”—Janet Fitch, author, Chimes of a Lost Cathedral

“Tom Rastrelli’s brave, candid, self-critical memoir is part of a great tradition of spiri­tual autobiographies, from St. Augustine’s Confessions to Thomas Merton’s The Seven Storey Mountain. Tom’s story differs from theirs because of his time and place. But he shares with them a commitment to hon­esty and to understanding the meaning of faith. This is an often beautiful, sometimes shocking, always important book.”—M. G. Lord, author, The Accidental Feminist: How Elizabeth Taylor Raised Our Consciousness and We Were Too Distracted by Her Beauty to Notice

"Confessions of a Gay Priest is an intimate, detailed, and fascinating look both within Catholic seminary life as well as the heart of its author, Tom Rastrelli. Confessions brings the reader into an odyssey of longing, frustration, times of joy, guilt, love, sorrow, inspiration, and insight . . . a fascinating look into the quest for self-acceptance, which drives Rastrelli to make difficult choices in order to be true to himself."—Mark Tedesco, author, That Undeniable Longing: My Road to and from the Priesthood

Tom Rastrelli is director of digital communications at Willamette University. He lives in Salem, Oregon.
Loading...
or support indie stores by buying on