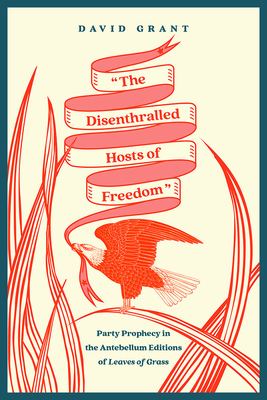 "The Disenthralled Hosts of Freedom"

Walt Whitman wrote three distinct editions of Leaves of Grass before the Civil War. During those years he was passionately committed to party anti-slavery, and his unpublished tract The Eighteenth Presidency shows that he was fully attuned to the kind of rhetoric coming out of the new Republican party. This study explores how the prophecies of the pre–war Leaves of Grass relate to the prophecy of this new party. It seeks not only to ground Whitman’s work in this context but also to bring out features of party discourse that make it relevant to literary and cultural studies.

Anti-slavery party discourse set itself the task of curing an ailing people who had grown compliant, inert, and numb; it fashioned a complete fictional world where the people could be reactivated into assuming their true role in the republic. Both as a cause and a result of this rejuvenation, they would come into their own and spread their energies over the land and over the body politic, thereby rescuing their country at the last minute from what would otherwise be the permanent dominion of slavery. Party discourse had long hinged its success on such magical transformations of the people individually and collectively, and Whitman’s celebrations of his nation’s potential need to be seen in this context: like his party, Whitman calls on the people to reject their own subordination and take command of the future, and redeem themselves as they also redeem the nation.


Praise For "The Disenthralled Hosts of Freedom": Party Prophecy in the Antebellum Editions of Leaves of Grass (Iowa Whitman Series)…

“This book is an exhilarating read for any student of American political thought and history. Political theorists have oft noted Whitman’s general skepticism about party politics, but Grant proffers that Whitman’s poetry had a far more complicated and evolving relationship to the discourse of his day.”—John E. Seery, editor, A Political Companion to Walt Whitman

“David Grant’s work is a much needed new and uniquely vivid historical study of Whitman’s politics and his relations to politics that further complicates while wonderfully deepening our understandings of the art and aesthetics of his prose and poetry. Of considerable value to a range of scholars and readers alike.”—Morton Schoolman, author, A Democratic Enlightenment: The Reconciliation Image, Aesthetic Education, Possible Politics

“Grant’s work is well constructed, scrupulous in its deployment of evidence, extremely well read in the political pamphlets and poems of the period, and highly persuasive in its conclusions. It mounts an important challenge to the established view of Whitman during these years—an increasing rarity in the crowded field of contemporary Whitman studies.”—M. Wynn Thomas, Swansea University

David Grant is professor emeritus of English at MacEwan University. He is author of Political Antislavery Discourse and American Literature of the 1850s. Grant lives in Edmonton, Alberta.
Loading...
or support indie stores by buying on