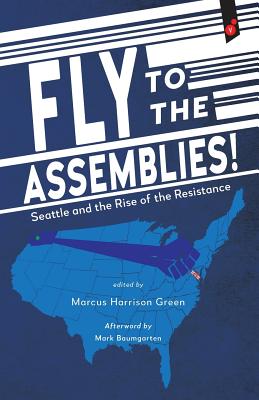 Fly to the Assemblies!

Seattle and the Rise of the Resistance

"But here is the thing with listening. At some point, it is not enough. The silence of the attentive, after all, sounds exactly the same as the silence of the complicit. . . . The question, then, becomes when to act: at what point is it appropriate to stop listening and actually say something?"
from the Afterword

Seattle has long been considered a center of progressive thought and action. And while that is largely true, like any other growing city it has wrestled with familiar demons: racism, class struggles, economic opportunism, sexism, and more. But since the 2016 election, the city has emerged as a central staging ground for the resistance against the new administration, its policies, and the rising wave of the far right.

Amid such turbulent times, we must not let injustice become the new status quo. We must question, criticize, and challenge the socio-political structures in place, and seek out solutions and changes that represent all Americans, not just a privileged and wealthy few. The diverse voices of the writers, activists and journalists in Fly To The Assemblies explore the redoubled challenges facing citizens today.

Marcus Harrison Green is the co-founder of the South Seattle Emerald, a former Reporting Fellow with YES! Magazine, a board member of the Western Washington Chapter of the Society of Professional Journalists and a recipient of Cross Cut’s Courage Award for Culture.
Loading...
or support indie stores by buying on