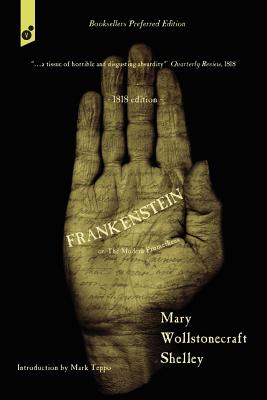 or, The Modern Prometheus. 1818 edition.

Shelley's mold-breaking and genre-creating Frankenstein hasn't been out of print since its first publication in 1818, though the story of science and dark melodrama has been reconfigured and reanimated many times over the years--in shadowy cinematic style in the 1930s; comedic, loveable boob-tube style in the 1960s; marvelously illustrated comic form in the 1970s; and even as a sweet treat children's cereal, evoking grunts and laughter, rather than shrieks of terror.

This printing returns the tale to its original form, uniting the three anonymously published volumes here in the Booksellers Preferred Edition. This version of the story, before the softening by Shelley in her 1831 revision, tells the tale of god-like aspirations and too-human failings, of the ache of longing to belong and relentless isolation, of family, of the emerging ethics of science and the often cruel realities of nature.

It's a story of rage, cowardness, inspiration, creation, and mortality. The kind of story that remains relevant for centuries.

With an introduction by bookseller and author Mark Teppo.

Featuring illustrations by Seattle-based bookseller-artists that help to flesh out this classic tale of a scientist and his creation in whimsical, spooky, and emotive ways.