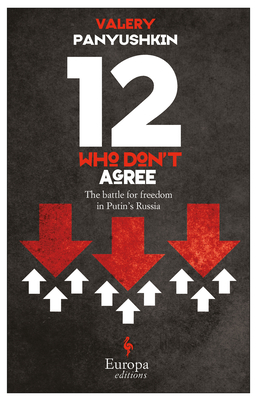 The Battle for Freedom in Putin?s Russia

In Twelve Who Don’t Agree, journalist Valery Panyushkin profiles twelve Russians from across the country’s social spectrum: a politician, a journalist, an army officer, an author, a bank manager, a laborer, a university student . . . Despite varied backgrounds, they all have one thing in common—participation in the historic March of the Dissidents. Held in 2007 to protest the eroding state of affairs in Russia, the March was held in flagrant violation of increasingly stringent laws forbidding public demonstrations. Though each of these men and women had personal reasons for joining the demonstration, they shared a belief that the government of Vladimir Putin was betraying the promise of Russia’s future.

Valery Panyushkin was born in 1969 in Leningrad. He has worked as a special correspondent for the newspapers Kommersant and Vedomosti. he wrote a regular column in Gazeta.ru, and earned the title of "Golden Pen" for his journalism. He is the author of the books Mikhail Khodorovsky: A Prisoner of Silence, Gazprom: The New Russian Weapon, and Something Unnoticeable. He lives in Moscow and currently works as a correspondent for Snob magazine.
Loading...
or support indie stores by buying on