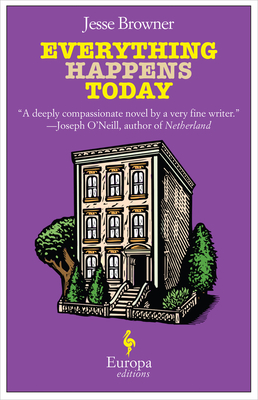 Jesse Browner's dazzling new novel records a single day in the life of Wes, a seventeen-year-old who attends Manhattan's elite Dalton School and lives in Greenwich Village in a dilapidated town house with his terminally ill mother, distant father and beloved younger sister. In the course of one day everything will happen to Wes: he will lose his virginity to the wrong girl and break his own heart, try to meet a Monday morning deadline for a paper on War and Peace, and prepare an elaborate supper he hopes will reunite his family. Wes struggles through the day deep in thoughts of sex, love, Beatles lyrics, friendship, God and French cuisine-a typical teenager with an atypical mind, a memorable young man who comes to the poignant understanding of how fragile but attainable personal happiness can be.

Everything Happens Today is funny, moving, generous and exhilarating. With a classic structure that nods, inevitably, to Mrs. Dalloway and characters worthy of comparison to those created by J.D. Salinger, Everything Happens Today will enchant young adults who see themselves in the story as well as adult readers who will be captured by the deeply sympathetic characters and the acute feel for the way we live now. Most readers will want it never to be over.

Praise For Everything Happens Today: A Novel…

Praise for Everything Happens Today

"Browner (The Uncertain Hour) has crafted a stupendous, thought-provoking, devilishly delicious novel that reads like Zen koan meets Portrait of the Artist as a Young Man with some modern "english" that sets the plate spinning. Highly recommended."
—Library Journal (starred review)

"A light, modern and keen look at the discord between whimsy and prudence."
—Kirkus Reviews

"If I say that Jesse Browner's The Uncertain Hour is a truly original work of art, I hope I won't scare anyone off. It's also the most engrossing page-turner I've picked up in a long while."
—Michael Cunningham, author of The Hours

"The Uncertain Hour is that very rare thing—an historical novel of love and ideas not only free of pedantry but also serious and entertaining...As one would expect from an award-winning translator of both Jean Cocteau and Rainer Maria Rilke, it's also elegantly written with a narrative so well-relaized that it's easy to overlook the 46-year-old author's formal audacity."
—Tim Rutten, Los Angeles Times

"The Uncertain Hour is...elegant meditation on such matters as the nature of love, what makes a good life, and whether there can be such a thing as a perfect death. I don't know which to praise more: the author's feat of historical reconstruction, or his boundless powers of invention."
—Sigrid Nunez, author of The Last of Her Kind

Jesse Browner is the author of four books including the novels Conglomeros (Random House 1992), Turnaway (Random House 1996) and The Uncertain Hour (Bloomsbury 2007). He has also translated a number of notable books including the award winning Celine: A Biography. He lives in Manhattan with his wife and two daughters.
Loading...
or
Not Currently Available for Direct Purchase