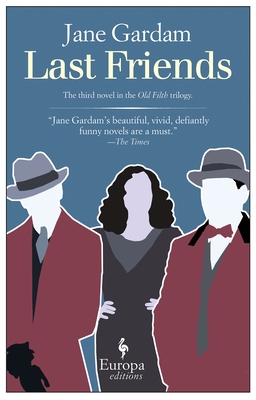 Last Friends is the third and concluding novel in the highly praised trilogy that began with Old Filth and continued with The Man in the Wooden Hat.

The haunting first novel was the story of a decades-long marriage that stretched from the immediate post-World War II period into the opening of the twenty-first century. Sir Edward Feathers (Old Filth) was a captivating character: so clever, so triumphantly his own man, so wounded by his dreadful childhood.

The Man in the Wooden Hat was Betty's story. She and Sir Edward met and married in Hong Kong. She was surdy and dependable, the exemplary wife of an eminent lawyer. She owned two exceptional strands of pearls given to her by two men, who desired her and despised each other with equal authority. This second, equally witty, novel weighed the difference between marriage and romance with great subtlety and understanding.

Last Friends is Terence Veneering's turn. His beginnings were not those of the usual establishment grandee. Filth's hated rival in court and in love is the son of a Russian acrobat marooned in the English midlands and a local girl. He escapes the war and later emerges in the Far East as a man of panache and fame. The Bar treats his success with suspicion: where did this handsome, brilliant Slav come from? This exquisite story of Veneering, Filth, and their circle tells a bittersweet tale of friendship and grace and of the disappoinments and consolations of age. They are all, finally, each other's last friend as this magnificent series ends with the deep and abiding satisfaction that only great literature provides.

Jane Gardam is the only writer to have been twice awarded the Whitbread Prize for Best Novel of the Year. She is winner of the David Higham Prize, the Royal Society for Literature's Winifred Holtby Prize, the Katherine Mansfield Prize, and the Silver Pen Award from PEN. Her novels include: God on the Rocks, shortlisted for the Booker Prize; Old Filth, a finalist for the Orange Prize; The Man in the Wooden Hat, finalist for the Los Angeles Times Book prize, and Last Friends, finalist for the Folio Award. She lives in the south of England, near the sea.

"Last Friends is evocative, elegiac, and shaded in autumnal tones, as suits the final volume in a trilogy. Like Evelyn Waugh's Brideshead Revisited, the Old Filth trilogy restores us to an era rich in spectacle and bristling with insinuation and intrigue. Vivid, spacious, superbly witty, and refreshingly brisk...the story (and the author) will endure."
—The Boston Globe

"All three Gardam books are beautifully written but it’s a pleasure to note that Last Friends, is the most enjoyable, the funniest and the most touching."
—National Post

"It’s hard...not to be charmed by a writer with Gardam’s substantial gifts."
—The New York Times Book Review

"Gardam proves that, even in its twilight, there is still life in the traditional English novel."—Publishers Weekly

"[Gardam] is a brilliant writer. Her prose sparkles with wit, compassion and humor."
—The Washington Post

"It's hard...not to be charmed by a writer with Gardam's substantial gifts."
—The New York Times Book Review

"Gardam's prose is so economical that no moment she describes is either gratuitous or wasted."
—The New Yorker

"Jane Gardam's beautiful, vivid, defiantly funny novels are a must."
—The Times