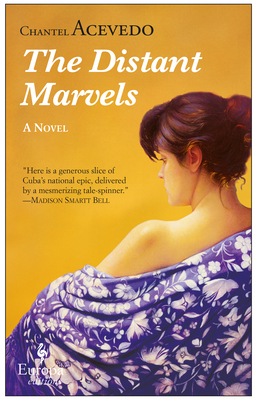 Maria Sirena tells stories. She does it for money—she was a favorite in the cigar factory where she worked as a lettora—and for love, spinning gossamer tales out of her own past for the benefit of friends, neighbors, and family. But now, like a modern-day Scheherazade, she will be asked to tell one last story so that eight women can keep both hope and themselves alive.

Cuba, 1963. Hurricane Flora, one of the deadliest hurricanes in recorded history, is bearing down on the island. Seven women have been forcibly evacuated from their homes and herded into the former governor’s mansion, where they are watched over by another woman, a young soldier of Castro’s new Cuba named Ofelia. Outside the storm is raging and the floodwaters are rising. In a single room on the top floor of the governor’s mansion, Maria Sirena begins to tell the incredible story of her childhood during Cuba’s Third War of Independence; of her father Augustin, a ferocious rebel; of her mother, Lulu, an astonishing woman who fought, loved, dreamed, and suffered as fiercely as her husband. Stories, however, have a way of taking on a life of their own, and transported by her story’s momentum, Maria Sirena will reveal more about herself than she or anyone ever expected.

Chantel Acevedo’s The Distant Marvels is an epic adventure tale, a family saga, a love story, a stunning historical account of armed struggle against oppressors, and a long tender plea for forgiveness. It is, finally, a life-affirming novel about the kind of love that lasts a lifetime and the very art of storytelling itself.

Praise For The Distant Marvels: A Novel…

Praise for The Distant Marvels

"A modern riff on Scheherazade that celebrates the art of the story."
—BookRiot

"Acevedo's prose has an endearingly relaxed feel-like she's sitting across from you and telling the tale."
—OZY

“Chantel Acevedo is one of the most versatile and exciting writers of her generation, with a voice that speaks not only to the American experience, but to our universal humanity. I fall for her characters, whole-heartedly, while being covetous of her stunning prose.”
—Julianna Baggott, author of the Pure trilogy

“Exquisitely rendered . . . The Distant Marvels is a Thousand and One Nights-style surrender to the true art of story telling.”
—Ana Castillo, author of The Guardians

“The Distant Marvels is a compelling, gorgeously-written epic about Cuban women as fierce as the storms and the hardships they endure. Every scene, every detail, every utterance and intimacy feels richly, enchantingly true.”
—Cristina Garcia, author of Dreaming in Cuban

“I loved The Distant Marvels . . . Acevedo’s language is liquid and gathering, mirroring the great ebb and swell of political struggle, transcending love, as well as the events that have gathered the storyteller, María Sirena, and her audience together under one brilliantly constructed ‘roof.’”
—Ru Freeman, author of On Sal Mal Lane

“The Distant Marvels is lush and captivating . . . The women in these pages survive to tell their tales, and oh, what wondrous stories they are.”
—Marie Manilla, author of The Patron Saint of Ugly

“Chantel Acevedo brilliantly conveys the dual nature of the stories we tell ourselves, which achieve grace and transformation through tempestuous churning. The Distant Marvels, like love itself, is both storm and shelter at once.”
—Justin Torres, author of We the Animals

"With enchanting novels such as A Falling Star and The Distant Marvels, Acevedo hovers between poetry and prose, romance and history, nostalgia and modern life."
—Margarita Engle, author of The Surrender Tree

“Love and Ghost Letters is enchanting; a heartfelt story…It captures, beautifully, the atmosphere and emotions of a time which, both Cuban Americans and many an American reader, will find both reminiscent and fulfilling. A great debut.”
—Oscar Hijuelos, author of The Mambo Kings Play Songs of Love, on Love and Ghost Letters

Chantel Acevedo was born in Miami to Cuban parents. She is the author of A Falling Star (Carolina Wren Press, 2014), Love and Ghost Letters (St. Martins, 2006), winner of the Latino International Book Award, and The Distant Marvels (Europa, 2015). Acevedo is an Associate Professor of English in the MFA Program of the University of Miami.