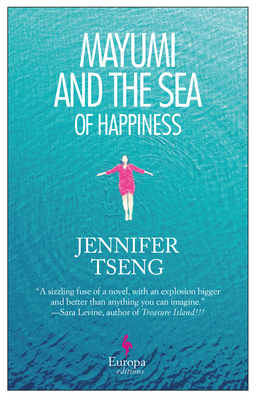 Mayumi and the Sea of Happiness

Finalist for the 2016 PEN AWARD for Debut Fiction

Books may be Mayumi Saito’s greatest love and her one source of true pleasure. Forty-one years old, disenchanted wife and dutiful mother, Mayumi’s work as a librarian on a small island off the coast of New England feeds her passion for reading and provides her with many occasions for wry observations on human nature, but it does little to remedy the mundanity of her days. That is, until the day she issues a library card to a shy seventeen-year-old boy and swiftly succumbs to a sexual obsession that subverts the way she sees the library, her family, the island she lives on, and ultimately herself.

Wary of the consequences of following through on her fantasies, Mayumi hesitates at first. But she cannot keep the young man from her thoughts. After a summer of overlong glances and nervous chitchat in the library, she finally accepts that their connection is undeniable. In a sprawling house emptied of its summer vacationers, their affair is consummated and soon consolidated thanks to an explosive charge of erotic energy. Mayumi’s life is radically enriched by the few hours each week that she shares with the young man, and as their bond grows stronger thanks not only to their physical closeness but also to their long talks about the books they both love, those hours spent apart seem to Mayumi increasingly bleak and intolerable. As her obsession worsens, in a frantic attempt to become closer to the young man, Mayumi nervously befriends another librarian patron, the young man’s mother. The two women forge a tenuous friendship that will prove vital to both in the most unexpected ways when catastrophe strikes.

Exquisitely written, Mayumi and the Sea of Happiness is part wry confession, part serious meditation. At its most anxious, it’s a book about time, at its most ecstatic, it’s a deeply human story about pleasure.

Praise For Mayumi and the Sea of Happiness…

Praise for Mayumi and The Sea of Happiness

"Mayumi’s trespasses and thrills are so deeply imagined that I lived her affair with her, cheering her even as I knew I would drown with her in her ecstasy. This book’s fierce physicality glitters beneath the surface of every heady sentence.”—Susanna Daniel, author of Stilsville and Sea Creatures

“Jennifer Tseng delivers an elegant exploration of passion and its consequences while casting her observant eye on motherhood, memory, exile, and female friendship. Carnal, witty, and slyly crafted, Mayumi and the Sea of Happiness is a sizzling fuse of a novel, with an explosion bigger and better than anything you can imagine.”—Sara Levine, author of Treasure Island!!!

"This is a confession that reads like an exultation, and Mayumi’s gleeful admissions will likely keep the reader turning pages at the kind of speed that inspires papercuts.”—The Seattle Review of Books