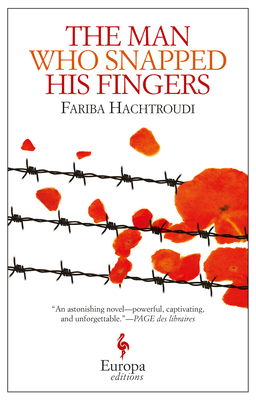 The Man Who Snapped His Fingers

The Man Who Snapped His Fingers is a novel of ideas, exploring power and memory by an important female writer from a part of the world where female voices are routinely silenced.  A defiant book in the face of repressive governments, this book illustrates the universal fight for freedom happening in our world today.

She was known as "Bait 455," the most famous prisoner in a ruthless theological republic. He was one of the colonels closest to the Supreme Commander. When they meet, years later, far from their country of birth, a strange, equivocal relationship develops between them. Both their shared past of suffering and old romantic passions come rushing back accompanied by recollections of the perverse logic of violence that dominated the dictatorship under which they lived.

Winner of the 2001 French Human Rights Prize, French-Iranian author Fariba Hachtroudi's English-language debut explores themes as old as time: the crushing effects of totalitarianism and the infinite power of love.

Praise For The Man Who Snapped His Fingers…

Praise for The Man Who Snapped His Fingers

"The story leaves us chilled by the tyrannical culture that created this macabre bond. But at the end, it's just as much a tale of the capacity of love."
—Minneapolis Star Tribune

“…a profound, exquisitely crafted novella about life under a merciless regime, about torture and resilience, truth and culpability and the triumph of love over fear.”
—The Independent (UK)

"Tightly plotted, this fierce literary thriller packs complex emotions in a small space, tackling difficult and essential questions about power and our responsibilities to one another."
—Kirkus Reviews

"Hachtroudi's book...is timeless in its meditations on totalitarianism and the toll it takes on even those who physically escape its clutches.”
—ShelfAwareness (Starred Review)

"The Man Who Snapped His Fingers is an ode to the mysteries that we all carry within ourselves."
—Paris Match

"Hachtroudi enchants her readers with this rich work that is at once a love story and a political tale."
—L'Express

Fariba Hachtroudi decided to leave her home country following the Iranian Revolution in 1979. After relocating to Sri Lanka in 1981, she taught at the University of Colombo for two years and studied Teravada Buddhism. Hachtroudi then pursued journalism and eventually went on to write a full-length non-fiction account about her revisit to Iran after 30 years in exile called The Twelfth Imam's a Woman? In addition to writing, Hachtroudi also leads a foundation that advocates for women's rights, education, and secularism.

Alison Anderson's translations for Europa Editions include novels by Sélim Nassib, Amélie Nothomb, and Eric-Emmanuel Schmitt. She is the translator of The Elegance of the Hedgehog (Europa, 2008) and The Life of the Elves (Europa, 2016) by Muriel Barbery.
Loading...
or support indie stores by buying on