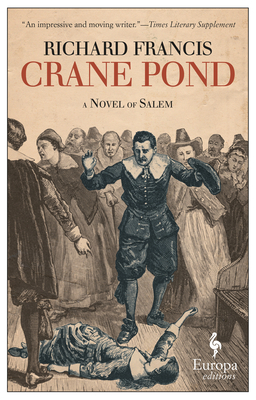 A Novel of Salem

Usually told from the perspective of the victims, the Salem Witch Trials are a forever story. The vestiges of a particular strain of American social hysteria remain with us even today. In Crane Pond, Richard Francis reveals a side of the history that is not often recounted, as he skillfully constructs a portrait of Samuel Sewall, the only judge to later admit that a terrible mistake had been made.

In a colony on the edge of survival in a mysterious new world where infant mortality is high and sin is to blame, Sweall is committed to being a loving family man, a good citizen, and a fair-minded judge. Like any believing Puritan, he agonizes over what others think of him, while striving to act morally correct, keep the peace, and (hopefully make time to) enjoy a hefty slice of pie. His one regret is that only months before he didn't sentence a group of pirates to death. What begins as a touching story of a bumbling man tasked with making judgements in a society where reason is often ephemeral, quickly becomes the chilling narrative we know too well. And when public opinion wavers, Sweall learns that what has been done cannot be undone.

Crane Pond explores the inner life of a well-meaning man who compormised with evil. It presents an unflinching portrayal of Sewall's efforts to piece together a new perspective from shattered preconceptions, vividly tracking his search for atonement, for peace, and ultimately for a renewal of hope. At once a searing view of the Trials from the inside out, an empathetic portrait of one of the period's most tragic and redemptive figures, and an indictment of the malevolent power of religious and political idealism, it is a thrilling new telling of one of America's founding stories.

Praise For Crane Pond: A Novel of Salem…

"Few have so nimbly conjured with Sewall and his silence as Richard Francis, author of an excellent 2005 biography of the Salem justice. [...] Now Francis has revisited the episode in a work of fiction, arguably the closest a biographer comes to setting his book to music. The quiet 'must haves' of the biography burst into exuberant set pieces in the novel, Crane Pond."
—Stacy Schiff, The New York Review of Books

"This is an entertaining and stimulating novel, richly peopled, that brings Salem, and the forms of belief that gave rise to it, to life with freshness, energy, intelligence — and with terrible and arresting proximity."
—Spectator

“[Crane Pond] gives a complete world-picture, offers the reader an alternative place to go and live for a time, and a new language to speak. In short, it goes straight on to my (small) list of historical novels that draw out the capacities of the form and allow readers to brush against the pleasures and terrors of the past.”
—Hillary Mantel, author of Wolf Hall

"I've loved diving deep into the fascinating world of this book: Richard Francis manages to make us feel its dailyness and it's strangeness both at once. Sewall's gathering unease, as he realises he's made his terrible mistake, is so brilliantly embodied in all the thick, foody, fleshly, weather-ridden detail of his ordinary life."
—Tessa Hadley, author of The Past

"Francis draws us into this fascinating world with his particular brand of philosophical questioning–he is concerned with clarity, precision and truth–and his clean, humanising prose is a joy to read. A remarkable portrait of Sewall at a critical moment in history."
—Nikita Lalwani, author of Gifted and The Village

"Set in the time just before, during, and then four years after the [Salem Witch] trials, this deftly crafted novel perfectly balances issues of religion, faith, and law."
—Library Journal

"In Crane Pond, Richard Francis creates a nuanced, compassionate and fascinating portrait of Samuel Sewall, the unwilling hanging judge.... But Francis does more: taking us beyond the complacency with which we often view this iconic moment in American history."
—Historical Novel Society

“The Whispering Gallery is beautifully written . . . This is a piece of work that should not be missed.”
—Newgate Callendar, The New York Times

“[Taking Apart the Poco Poco is] a comic novel with a heart and soul, the kind of book one always wants to read but can never find.”
—Nick Hornby, The Observer

“[Judge Sewall’s Apology is] the most balanced and richly contextualized account of the Salem trials currently in print.”
—John Adamson, Sunday Telegraph

“In the reading business, one doesn’t often come across a book one wishes would never end; but this is precisely what exists in this truly splendid novel.”
—Katherine Powers, Boston Sunday Globe on Taking Apart the Poco Poco"

Richard Francis was educated at Cambridge and Harvard. He has written 17 books, both fiction and
nonfiction, including a number of books on American history and thought. His award-winning novels and books of nonfiction have been published by leading houses in London and New York, including Fourth Estate, Simon & Schuster, Harper Collins, W.W. Norton, Faber & Faber, and Pantheon. He and his wife live in Bath.
Loading...
or support indie stores by buying on