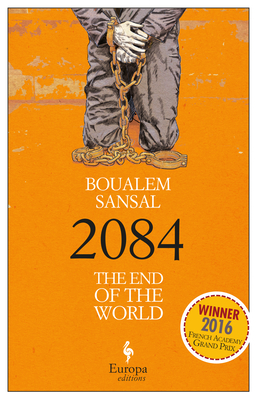 The End of the World

A tribute to George Orwell's 1984 and a cry of protest against totalitarianism of all kinds, Sansal's 2084 tells the story of a near future in which religious extremists have established an oppressive caliphate where autonomous thought is forbidden.

It is the year 2084. In the kingdom of Abistan—named after the prophet Abi, earthly messenger of the god Yolah—citizens submit to a single god, demonstrating their devotion by kneeling in prayer nine times a day. Autonomous thought has been banned, remembering is forbidden, and an omnipresent surveillance system instantly informs the authorities of every deviant act, thought, or idea. The kingdom is blessed and its citizens are happy, filled with a sense of purpose and piety. Those who are not—the heretics—are put to death by stoning or beheading in city squares. But Ati has met people who think differently; in ghettos and caves, hidden from the authorities, exist the last living heretics and free-thinkers of Abistan. Under their influence, Ati begins to doubt. He begins to think. Now, he will have to defend his thoughts with his life.

"[In 2084] Sansal dared to go much further than I did," said Michel Houellebecq, the controversial novelist most recently of Submission. 2084 is a cry of freedom, a call to rebellion, a gripping satirical novel of ideas, and an indictment of the religious fundamentalism that, with its hypocrisy and closed-mindedness, threatens our modern democracies and the ideals on which they are founded.

"2084 is a powerful novel that celebrates resistance.”
—The Guardian

""A powerful satire on an Islamist dictatorship."
—The Spectator

"Alison Anderson's deft and intelligent translation of 2084 helps to overcome such binary thinking by conveying Sansal's abhorrence of a system that controls people's minds, while explaining that the religion was not originially evil but has been corrupted. A moving and cautionary story."
—Kate Webb, The Times Literary Supplement

“2084 is a rare, powerful book, at the intersection of fable and lampoon,
of satire and science fiction.”
—Lire

"Sansal is our guide into absurdity and out of it, the perfect guide through the fear and laughter we expend reading 2084.”
—The Rain Taxi Review

Boualem Sansal is the Arab world’s most courageous and controversial novelist. His first novel to appear in English (The German Mujahid, Europa 2009) was the first work of fiction by an Arab writer to acknowledge the Holocaust in print. He started writing novels at the age of fifty, shortly after retiring as a high-ranking official in the Algerian government. He was awarded the prestigious Prix du Roman Arabe in 2012, and the German Peace Prize in 2011.
Loading...
or
Not Currently Available for Direct Purchase