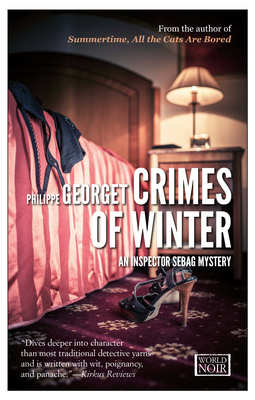 Crime, suspense, and marital woes combine in this atmospheric procedural set in the seemingly quiet Mediterranean town of Perpignan.

This winter is going to be a rough one for Inspector Gilles Sebag, for he has discovered a terrible truth: Claire has been cheating on him. Bouncing between depression, whisky, and insomnia, he buries himself in work in an attempt to forget.

But his investigations lead him inexorably to bigger tragedies—a woman murdered in a hotel, a depressed man who throws himself from the roof of his building, another who threatens to blow up the neighborhood—all of them involving betrayals of some sort. Perpignan seems to be suffering from a veritable epidemic of crimes of passion. Adultery is everywhere! And each betrayal leads to another dramatic crime.

Sebag has an uncanny ability to slip into the skin of his suspects and solve apparently unsolvable crimes. Though professionally charmed, he is unlucky in love. He is a perfect protagonist for the town of Perpignan, sleepy and leisurely on the surface, seething with vice and violence underneath.

Philippe Georget was born in 1962. He works as a TV news anchorman for France-3. A passionate traveler, in 2001 he traveled the entire length of the Mediterranean shoreline with his wife and their three children in an RV. He lives in Perpignan. Summertime, All the Cats Are Bored, his debut novel, won the SNCF Crime Fiction Prize and the City of Lens First Crime Novel Prize.

Praise For Crimes of Winter: An Inspector Sebag Mystery…

Praise for Crimes of Winter


"The third installment from Georget (Autumn, All the Cats Return, 2014, etc.) dives deeper into character than most traditional detective yarns and is written with wit, poignancy, and panache."
—Kirkus Reviews

"Reading Crimes of Winter is particularly enjoyable because of its entertaining cast of oddball characters, but at the same time the author schools the reader in the differences between French and American policing."
—Betty Webb, Mystery Scene Magazine

"Fans of French settings will enjoy venturing outside of Paris, and the year-end holiday provides an additional measure of atmosphere to the crimes and solutions here."
—Library Journal


"Georget provides great details along with a pace that lets the reader soak up those late-night swims and wine-soaked dinners in the end-of-summer Mediterranean heat."
—Star Tribune

"Savor the Gallic charm of this sizeable case for Inspector Sebag."
—Financial Times