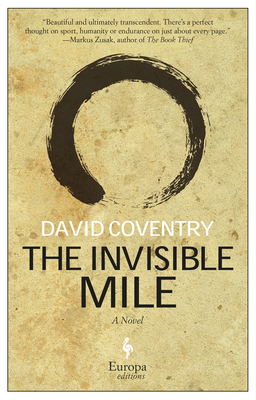 A re-imagining of a true story, The Invisible Mile is a novel about the capacity of the human mind and body when stretched to their absolute limits, written in prose that calls to mind the works of Marilynne Robinson and John Banville, as well as Colson Whitehead’s National Book Award-winning novel The Underground Railroad.

In 1928, the Ravat-Wonder cycling team became the first English-speaking peloton to compete in the Tour de France. The riders, from faraway New Zealand and Australia, were treated as exotics and isolated from their surroundings by a thick barrier of language and culture. Underfinanced and undertrained, the team faced one of the toughest routes in the race’s history, 5,476 kilometers over unsealed roads through a landscape heavy with the legacy of the Great War. 162 cyclists began the race that year, only 42 finished.

A deeply introspective and spiritual book, The Invisible Mile is narrated by a fictional rider from the Ravat-Wonder team. Speaking no French and knowing a scant few of his fellow riders, his race becomes a confrontation with memories of the Great War and a quest to understand his own place amongst its history. He rides on the alternating highs of cocaine and opium, pain and pleasure, victory and defeat. And as he nears the northern battlefields and his last, invisible mile, trauma, exertion, and his personal demons take over. The Invisible Mile is the story of one man’s struggle for survival in the face of physical and psychological hardship, a profoundly human story about guilt and redemption.

Praise For The Invisible Mile: A Novel…

Praise for The Invisible Mile

"Bruising, beautiful and ultimately transcendent, there's a perfect thought on sport, humanity or endurance on just about every page."
—Markus Zusak, author of The Book Thief

"The sensuous language Coventry deploys to externalize the sensations of racing in packs, as well as the self-conscious intimacies of men ‘roughhousing the love out of the late evening’ or exposing their souls in the down times like jittery troops steeling themselves before battle.”
—New York Times Book Review

"Written with poetic beauty. The Invisible Mile is an important and impressive debut."
—Sunday Star Times

"Fictionalised accounts of sporting events don't always work, but this has the same feeling of total immersion as I remember feeling when I read David Peace's The Damned United."
—Ned Boulting, author of On the Road Bike