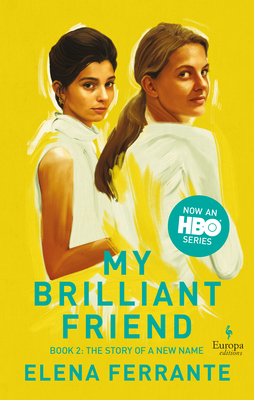 The Story of a New Name (HBO Tie-In Edition)

A novel in the bestselling quartet about two very different women and their complex friendship: "Everyone should read anything with Ferrante's name on it" (The Boston Globe).

The follow-up to My Brilliant Friend, The Story of a New Name continues the epic New York Times-bestselling literary quartet that has inspired an HBO series, and returns us to the world of Lila and Elena, who grew up together in post-WWII Naples, Italy.

In The Story of a New Name, Lila has recently married and made her entr e into the family business; Elena, meanwhile, continues her studies and her exploration of the world beyond the neighborhood that she so often finds stifling. Marriage appears to have imprisoned Lila, and the pressure to excel is at times too much for Elena. Yet the two young women share a complex and evolving bond that is central to their emotional lives and a source of strength in the face of life's challenges. In these Neapolitan Novels, Elena Ferrante, "one of the great novelists of our time" (The New York Times), gives us a poignant and universal story about friendship and belonging, a meditation on love and jealousy, freedom and commitment--at once a masterfully plotted page-turner and an intense, generous-hearted family saga.

"Imagine if Jane Austen got angry and you'll have some idea of how explosive these works are." --The Australian

"Brilliant . . . captivating and insightful . . . the richness of her storytelling is likely to please fans of Sara Gruen and Silvia Avallone." --Booklist (starred review)

Elena Ferrante is the author of The Days of Abandonment (Europa, 2005), which was made into a film directed by Roberto Faenza, Troubling Love (Europa, 2006), adapted by Mario Martone, and The Lost Daughter (Europa, 2008), soon to be a film directed by Maggie Gyllenhaal. She is also the author of a Frantumaglia: A Writer's Journey (Europa, 2016) in which she recounts her experience as a novelist, and a children's picture book illustrated by Mara Cerri, The Beach at Night (Europa, 2016). The four volumes known as the "Neapolitan quartet" (My Brilliant Friend, The Story of a New Name, Those Who Leave and Those Who Stay, and The Story of the Lost Child) were published in America by Europa between 2012 and 2015. The first season of the HBO series My Brilliant Friend, directed by Severio Costanzo premiered in 2018. Ann Goldstein has translated into English all of Elena Ferrante's books, including each of the New York Times bestselling installments in Ferrante's Neapolitan quartet, the fourth of which, The Story of the Lost Child, was shortlisted for the MAN Booker International Prize. She has been honored with a Guggenheim Fellowship and is a recipient of the PEN Renato Poggioli Translation Award. She lives in New York.
Loading...
or support indie stores by buying on