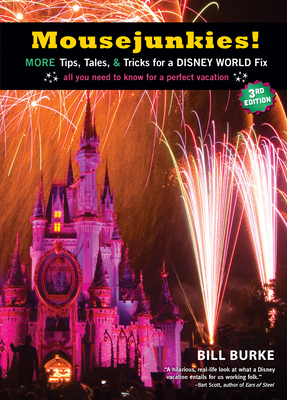 More Tips, Tales, and Tricks for a Disney World Fix: All You Need to Know for a Perfect Vacation

A guidebook with a decidedly different approach, Mousejunkies is a collection of humorous travelogues and insider how-to secrets compiled after scores of trips to Walt Disney World. The book draws on the insights of a panel of Disney fanatics -- The Mousejunkies. This third edition brings everything up to date with countless new tips, tricks, and tales. Told through personal accounts, all of the most important topics are covered: when to go, where to stay, what to do, and where to eat. Readers also learn how to avoid melting down under the Florida sun, how to extract your family from Fantasmic with your sanity intact, where to catch a mid-afternoon catnap, and even how wrong things go when "Epcrotch" strikes. Mousejunkies is more than one travel writer's experiences: The Mousejunkies have found themselves inexplicably drawn to Walt Disney World, again and again. Each has taken his or her own path, finding his or her way separately. The stories -- wry, humorous, and told with an affection gained through years of Disney addiction -- paint vivid portraits of a creatively engineered world, where unexpected surprises create lasting memories. The tips are told with a sly wink and the desire to share the secrets.

Bill Burke is a veteran newspaper reporter and editor. He has spent 19 years at the Boston Herald and is currently the paper's travel columnist. He is also a columnist at Parenting NH magazine, where he has been named a three-time consecutive winner of Best Humor Column by the Parenting Media Association. He has also recently written for the Travel Channel and AOL's Gadling blog. He has traveled to Walt Disney World countless times over the years. During his 21-year journalism career, he has covered marathons and murders, and he has written everything from business features to comic book scripts. Bill has been traveling to and writing about Walt Disney World for the past 16 years. He lives in southern New Hampshire with his wife, Amy, and 12-year-old daughter, Katie.
Loading...
or support indie stores by buying on