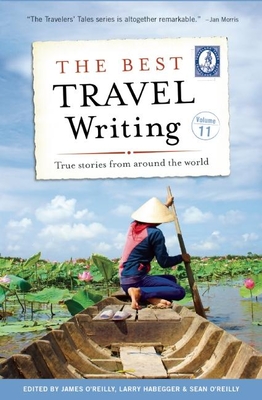 True Stories from Around the World

The Best Travel Writing, Volume 11 is the latest in the annual Travelers' Tales series launched in 2004 to celebrate the world's best travel writing -- from Nobel Prize winners to emerging new writers. The points of view and perspectives are global, and themes encompass high adventure, spiritual growth, romance, hilarity and misadventure, service to humanity, and encounters with exotic cuisines and cultures. Includes winners from the annual Solas Awards for Best Travel Writing. Introduction by Rolf Potts In The Best Travel Writing, Volume 11, readers will: Piece together the puzzle of life in rural Cambodia
Reawaken the joy of travel on a bus ride through Mexico
Reexamine war memories with former soldiers in Vietnam
Learn the ropes and the art of sailing with a good captain on the Pacific
Find a true soul sister in the highlands of Ecuador
Follow Vincent van Gogh's footsteps in France
Survive (or not) a home invasion in Brazil...and much more.

James O'Reilly, publisher of Travelers' Tales, was born in Oxford, England, and raised in San Francisco. He's visited fifty countries and lived in four, along the way meditating with monks in Tibet, participating in West African voodoo rituals, rafting the Zambezi, and hanging out with nuns in Florence and penguins in Antarctica. He travels whenever he can with his wife and their three daughters. They live in Palo Alto, California, where they also publish art games and books for children at Birdcage Press (birdcagepress.com). Larry Habegger, executive editor of Travelers' Tales, has visited almost fifty countries and six of the seven continents, traveling from the Arctic to equatorial rainforests, the Himalayas to the Dead Sea. In the 1980s he co-authored mystery serials for the San Francisco Examiner with James O'Reilly, and since 1985 has written a syndicated column, "World Travel Watch" (WorldTravelWatch.com). Habegger regularly teaches travel writing at workshops and writers' conferences, is a principal of the Prose Doctors (prosedoctors.com), and editor-in-chief of Triporati.com, a destination discovery site. He lives with his family on Telegraph Hill in San Francisco. Sean O'Reilly is editor-at-large for Travelers' Tales. He is a former seminarian, stockbroker, and prison instructor who lives in Virginia with his wife and their six children. He's had a lifelong interest in philosophy and theology, and is the author of How to Manage Your DICK: Redirect Sexual Energy and Discover Your More Spiritually Enlightened, Evolved Self (dickmanagement.com). His travels of late have taken him through China, Southeast Asia, and the South Pacific; his most recent non-travel project is redbrazil.com, a bookselling site.
Loading...
or support indie stores by buying on