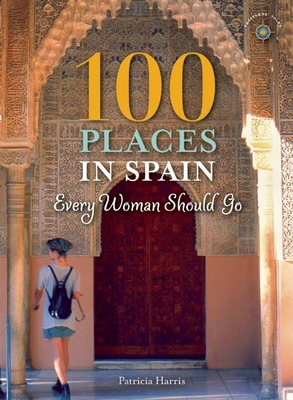 100 Places in Spain Every Woman Should Go

Patricia Harris began visiting Spain shortly after the death of dictator Francisco Franco and has witnessed the country's renaissance in art, culture, and cuisine as it rejoined Europe. Drawing on three decades of intimate acquaintance with the country, she leads readers along twisting mountain roads, down to the docks of fishing villages, into the shoe outlets of Elche, and out to the muddy saffron fields of La Mancha. She takes you down city streets of Barcelona, Madrid, Sevilla, and San Sebastian to dark flamenco clubs, sybaritic public baths, endlessly inventive tapas bars, design shops full of mantillas and fans, and into a brightly tiled chocolater a for hot chocolate and churros at 3 a.m. She explores the art from Vel zquez to Picasso, architecture from the phantasmagorical vision of Antoni Gaud 's Sagrada Familia to the cool suspension spans of Santiago Calatrava. She tells the tales of some formidable Spanish women, from a fourth-century B.C. goddess to a queen who wrested Spain from the Moors, to the twenty-first-century winemakers who elevated Spain's Toro and Rueda onto the world stage. Literary, sexy, whimsical, and even spiritual, 100 Places in Spain Every Woman Should Go is for the smart and curious traveler who wants to see Spain, her way.