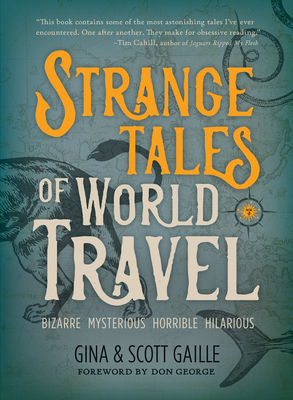 "What's the strangest thing you've ever seen or experienced?"

Gina and Scott Gaille have traveled to more than 100 countries, including many off-the-beaten-path places in Africa, South America, and Asia. Wherever they go, they ask this question. Everyone has a story, and some are truly extraordinary.

Daring Diplomat, who ate the flesh of the venomous cobra bird in the Sahara Desert Pearl Trader, who survived a fever through a harrowing human honey treatment in Oman Agent Ghost, who was shot and left to die in a garbage dump in Africa Death-Defying Instagrammer, who stepped on the tail of the world's sixth most venomous snake in Australia to take a better photo Human Pet, who became a prince's prisoner in Qatar Imperial CEO, who made a minion fly twelve hours to Paris from Abu Dhabi to buy clean underwear Gorilla Doll, who broke the rules of visiting Rwandan gorillas and got dragged up the side of a volcano

Strange Tales of World Travel presents unforgettable stories that celebrate the unique character of countries around the globe--and the distinctive characters that make travel endlessly intriguing and exhilarating.

Gina and Scott Gaille grew up in small towns in central Michigan and south Texas. Even then, both dreamed about exploring the farthest corners of the planet. Gina's favorite TV show was Hart to Hart, whose globetrotting detectives--played by Robert Wagner and Stefanie Powers--journeyed to South America, China, and Australia. Scott spent Sunday evenings glued to Mutual of Omaha's Wild Kingdom, whose safari-jacketed host, Marlin Perkins, introduced him to exotic landscapes and their peoples. Gina is most passionate about Africa, where she once served as a missionary in a remote part of Kenya. Scott's career as a lawyer and academic at The University of Chicago and Rice University has taken him to more than 100 nations around the world, including 30 in Africa. It was their shared passion for experiencing the world that brought them together.
Loading...
or support indie stores by buying on