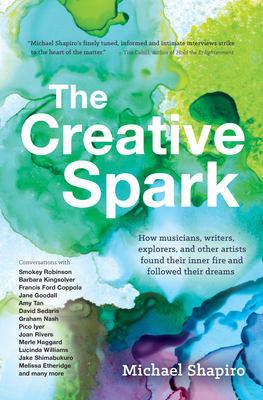 How Musicians, Writers, Explorers, and Other Artists Found Their Inner Fire and Followed Their Dreams

Creative people have a certain spark: a brightness in their eyes, an inquisitive way of looking at the world, a desire to make things. But that spark doesn't reside solely in people you may view as creators. It's in all of us.

The Creative Spark is a collection of interviews with some of the most creative people of our time: musicians, authors, visual artists and chefs. These makers speak about what drives them, what helps them to see the world in fresh ways, and what inspires them turn their visions into art.

During the past decade, Michael Shapiro has interviewed some of our brightest creative luminaries. Among the authors are Amy Tan, David Sedaris, Barbara Kingsolver, Pico Iyer, and Frances Mayes. His work as a music journalist has led to interviews with legends including Smokey Robinson, Lucinda Williams, Graham Nash, Lyle Lovett, Melissa Etheridge, Merle Haggard, and Jethro Tull bandleader Ian Anderson. And he's spoken with creative masters in other field, such as director Francis Ford Coppola and comedian Joan Rivers.

Yet it's not simply that Shapiro has had access to so many supremely talented and creative people -- it's that he gets them to go deep. Moments into his conversation with Lucinda (her fans call her by her first name), she tells Shapiro about how decisions made about her mother's funeral led to fissures in her family. From this achingly personal conversation, readers can glean fresh insights into why Lucinda has such a devoted following and why her songs open listeners' hearts.

There are people who you might not expect to find in this collection, such as explorer Jane Goodall, whose entire life has been a creative endeavor. Then there's San Francisco Giants announcer Mike Krukow, who turns every broadcast into a work of art. And there are a couple of chefs, such as SingleThread's Kyle Connaughton, who are transforming the way we approach fine dining.

Unexpected revelations pop up in every chapter of The Creative Spark. Iowa folksinger Greg Brown isn't a household name, but his fellow musicians revere his poetic compositions.

Each chapter starts with a short biography of the creative person being profiled then segues into Q+A. This collection brings together some of the best-known artists of our time with others who may not be as famed but who have something important to say about living an artful life.

The Creative Spark stands as a testament to human achievement, showing how creativity illuminates our world and how it resides in each and every one of us, just waiting to break out.

**Independent Publisher Book Awards Bronze Winner in Performing Arts (Music/Dance/Cinema/Theater)** **Foreword Magazine Book of the Year Medal Winner** **Independent Publisher Book Awards finalist for A Sense of Place** **Winner of the Bedford Pace Grand Award and Lowell Thomas Award** Michael Shapiro is a heralded journalist known for the keen insight he brings to interviews. Working for leading newspapers (Washington Post, New York Times, and San Francisco Chronicle) and national magazines (National Geographic Traveler, American Way, Hemispheres), Shapiro has interviewed many of the most creative people of our time. He's become known for his ability to forge personal connections with artists such as Smokey Robinson, Lucinda Williams, David Sedaris, Graham Nash, Melissa Etheridge, Amy Tan, and Lyle Lovett. These renowned innovators and many others share the secrets of their creative processes in The Creative Spark. Shapiro's previous book, A Sense of Place: Great Travel Writers Talk About Their Craft, Lives, and Inspiration (Travelers' Tales) is a collection of interviews with the world's top travel authors, including Bill Bryson, Pico Iyer, Jan Morris, Paul Theroux, Simon Winchester, Peter Matthiessen, and Frances Mayes. In 2017, Shapiro delivered a TEDx talk entitled "The Space Between" about how travel can narrow the gaps between people all over the globe and why that's more important than ever. A native of New York, Shapiro graduated from U.C. Berkeley with high honors and now lives with his wife in Sonoma County, Calif. His National Geographic Traveler feature, about Jan Morris' corner of Wales, won the Bedford Pace grand award. His story about sustainable seafood in Vancouver earned the 2016 Explore Canada Award of Excellence in the culinary category. He has contributed several in-depth interviews to The Sun, a literary magazine, including conversations with oral historian Studs Terkel and oceanographer Sylvia Earle. Both are in The Creative Spark. Shapiro has written about the Naadam festival in Mongolia for the Washington Post, tasted tequila in Jalisco for American Way, and spoken with Jane Goodall for O the Oprah Magazine. From 2011 to 2018, he wrote a weekly column about gambling for the San Francisco Chronicle and for four years had a column in the Chronicle's travel section. He volunteers as a whitewater rafting guide and sea kayak trip leader for Environmental Traveling Companions, a San Francisco-based group that takes physically challenged people on outdoor adventures. In 2016, he co-led a river trip down the Colorado River through the Grand Canyon, rowing his wife and others through the river's fiercest rapids, including Lava Falls.
Loading...
or support indie stores by buying on