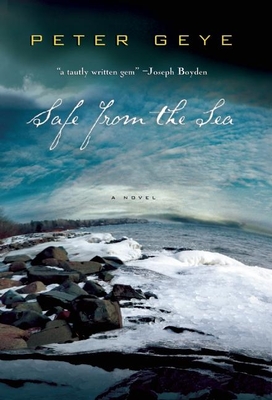 Safe from the Sea

“Peter Geye brings to life images of maritime history from a time when the ore ships plied the waters of the Great Lakes to feed the great industrial heart of America. Classic themes of redemption,reconciliation, and family ties are set against the awesome power and beauty of the north shore of Lake Superior. In the final weeks of his life, Olaf relives the story of his survival in an ore boat wreck decades earlier, and acknowledges his feelings of guilt and regret, while his estranged son Noah discovers that things are not always as they seem.”
— Joni Montover, Paragraphs on Padre Boulevard, South Padre Island, TX
View the List

“Peter Geye brings to life images of maritime history from a time when the ore ships plied the waters of the Great Lakes to feed the great industrial heart of America. Classic themes of redemption, reconciliation, and family ties are set against the awesome power and beauty of the north shore of Lake Superior. In the final weeks of his life, Olaf relives the story of his survival in an ore boat wreck decades earlier, and acknowledges his feelings of guilt and regret, while his estranged son Noah discovers that things are not always as they seem.”
— Joni Montover, Paragraphs on Padre Boulevard, South Padre Island, TX
View the List

Set against the powerful lakeshore landscape of northern Minnesota, Safe from the Sea is a heartfelt novel in which a son returns home to reconnect with his estranged and dying father thirty-five years after the tragic wreck of a Great Lakes ore boat that the father only partially survived and that has divided them emotionally ever since. When his father for the first time finally tells the story of the horrific disaster he has carried with him so long, it leads the two men to reconsider each other. Meanwhile, Noah's own struggle to make a life with an absent father has found its real reward in his relationship with his sagacious wife, Natalie, whose complications with infertility issues have marked her husband's life in ways he only fully realizes as the reconciliation with his father takes shape. Peter Geye has delivered an archetypal story of a father and son, of the tug and pull of family bonds, of Norwegian immigrant culture, of dramatic shipwrecks and the business and adventure of Great Lakes shipping in a setting that simply casts a spell over the characters as well as the reader.

Praise For Safe from the Sea…

A rich, satisfying novel about family members who make amends after a lifetime of estrangement.”The Minneapolis Star Tribune

"an estranged father and son find reconciliation in the final week of the father’s lifeGeye tackles the subjects of death, dying, and living with admirable insight and courageGeye engages the complexities of family dynamics skillfully and handles especially well the kind of family grudges and misunderstandings that can cripple relationships for decades, as they do here. Inspiring, wise, and enthusiastically recommended for all readers." Library Journal

A reader can just about feel the cold spray of Lake Superior and taste the softness of the lefse. The best sections of "Safe From the Sea" are the stories Olaf tells, and the questions Noah asks, especially about the tragedy of the Ragnarøk. What we expect from a man vs. nature story is not that man will win, but that man will be wise and valiant, and give it everything he has. Olaf's account of the wreck lives up to the great tradition of adventure storytelling. His pain about the shipwreck is not only survivor's angst, but also specific guilt about a lost shipmate that he has never shared before. Olaf's last wish presents Noah with a watery physical challenge of his own, and gives the back end of the novel a touch of fairy tale, a la late John Cheever.”The Milwaukee Journal Sentinel

A finely crafted first novelGive this book to readers of David Guterson and Robert Olmstead, who will be captured by the themes of approaching death and the pain and solace provided by nature.”Booklist

"At once a Great Lakes adventure, an ode to a vanished life, and a gorgeous examination of the healing of deep wounds between father and son. This is a tautly written gem."Joseph Boyden, author of Three Day Road

[A] lyric story of familial strife and reconciliationGeye excels at capturing the importance of life’s seemingly small moments and at cataloging their beautyGeye shows how relationshipshowever flawed the participantscan be salvaged and strengthened when people strive to make things work through understanding and the search for and sharing of the truth.”ForeWord Magazine

Geye is a skilled and subtle observer. Throughout the book, readers are given an affectionate and perceptive view of roughhewn northern Minnesota, not only its Walden-esque lakes and forests, but also its thrifty and honest peopleGeye is a gifted storytellerGeye might wince to read this, but he could be a first-rate adventure novelist. He also excels in creating characters who are ordinary and exceptional at the same timehigh praise for any author. The characters in Safe from the Sea are maturely-crafted; there are no heroes or villains in the book, just good people working through tough issues with grace and good humor.”The New York Journal of Books


Besides being a page-turning delight, his book is beautifully written, and the relationship between Noah and Olaf is one of the greatest father and son stories I've ever come across. This is a stunning novel...”Steve Yarbrough, author of Safe from the Neighbors

"Peter Geye has rendered the Minnesota north shore in all its stark, dangerous beauty, and it is the perfect backdrop for this deeply moving story of conflict and forgiveness. Safe from the Sea is a remarkable debut."Ron Rash,The Cove

"A deep hearted novel of bitten lives lived out on the cold shore of a ferocious world. In the silence of their existence, the dignity of their bearing, Geye compassionately renders the magnitudes of their despair, endurance and greatness." Robert Olmstead, author of Coal Black Horse

I don't know of another novel that better captures that stormy North Atlantic up in Minnesota called Lake Superior than Peter Geye's compelling debut novel, Safe from the Sea. He captures the wildness and the cold and braids those figurative aspects into a tenderly told story of a son and a father who has been anything but tendera riveting sea talememorable.” Stuart Dybek, author of The Coast of Chicago

This is a character-driven story and one that demonstrates the power of memory and the bonds of blood, a story of love and hope.”bookviews.com

Peter Geye’s Safe From the Sea, which I’m actually right in the middle of right now, but I can already tell that this is a special book. Lyrical, loaded with compassion for its characters, one of which is this arresting, dangerously alluring coast of Lake Superior. This is a gripping wonder of a book.”Bruce Machart, author of The Wake of Forgiveness

What starts out as a simple story of reconciliation soon reveals itself as something much deeper. After receiving an unexpected call from his estranged and ailing father, Noah Torr journeys home to make peace with the former ore boat sailor. When his father finally tells the story of the shipwreck that haunted him for the past thirty-five years, Noah gains valuable insights that allow him to start fresh with his own growing family.”Northeast Minnesota Book Award citation

1. How has grief changed the lives of the main characters in this novel?

2. How does setting affect these characters, and reflect them?

3. Did Noah make the right decision to go help his father and leave Natalie?

4. Noah is interested in ski jumping and in old maps. How do these metaphors shape the story?

5. Why do you think Olaf turned to Noah for help instead of turning to Solveig? Were his reasons deeper than the obvious?

6. How are these characters now safe from the sea?

7. Olaf presents his son with a special request. Do you think it was too much to ask? Were you surprised with how things played out?

9. Alyson Hagy, in praising the novel, said it was “All shipwreck and rescue.” Do you agree? If so, how?

10. Some would argue this is a novel of redemption. Discuss.

11. Noah is ambivalent about his own possible fatherhood, given his childhood. But he recognizes the meaning a child would bring to Natalie’s life. How do his wife’s fertility problems and efforts complicate his emotions? In what ways does reconciliation with his father deepen his relationship with his wife and allow him to consider a fatherhood determined by who he is as a man and not who he was as a child?