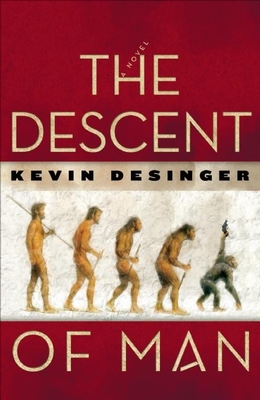 The Descent of Man (Hardcover)

One night Jim, a quiet wine steward, wakes to find two men trying to steal his car. Against the petitions of his wife, he goes outside to get the plate number of the thieves' truck. Instead, something comes over him and he drives away in their truck until he recovers his wits and realizes what he's done. When Jim learns that the two would-be thieves are brothers with a history of violence, he soon finds himself over his head in a mire of sinister events and must risk everything to regain what he can of his life before that night. "There are books that you can't put down, and there are books that won't go away even after you put them down, the force of their moral conundrums haunting the stories of our own lives. The Descent of Man is a spectacular showcase for both literary virtues--the riveting tale of a modest but perfect life under assault, and a resonating challenge to our own self-knowledge, the authenticity of that knowledge, which can only be confirmed through crisis. Who are we when push comes to shove? What are we capable of? Do we have the fortitude to save ourselves from the bad things in the world, and the backbone--the strength of mind and spirit--to protect those we love from harm? Kevin Desinger confronts us with these questions in the steady, quiet voice of Everyman, a decent guy sitting in a parlor chair, calmly narrating a firestorm that's consuming his house and family. He has written a novel that is flawless, masterful, unforgettable, and chilling in its dramatization of the way we live in fragile grace each day in America, our blessings balanced on the edge of violence and loss." --Bob Shacochis

Praise For The Descent of Man…

"Give one of Harlan Coben's everyday heroes a conscience, a wine cellar and a sensitive wife, and there you have Jim."The Oregonian

"There are books that you can't put down, and there are books that won't go away even after you put them down, the force of their moral conundrums haunting the stories of our own lives. The Descent of Man is a spectacular showcase for both literary virtues--the riveting tale of a modest but perfect life under assaultflawless, masterful, unforgettable, and chilling in its dramatization of the way we live in fragile grace each day in America, our blessings balanced on the edge of violence and loss." Bob Shacochis

Kevin Desinger’s harrowing first novel . . offers a meditation on the struggle between thought and action . . . Desinger’s fumbling hero is swept along by the same pensive indecision that carried Hamlet to his grisly end . . but, unlike Hamlet, emerges from the shadows changed. . . . and shows us not only the terrifying consequences but perhaps also the sobering necessity of indulging our inner darkness.”Portland Monthly

As you read this book you will find yourself repeatedly asking, What would I do?’ The story is thought-provoking and real . . . You will keep turning the pages, wanting to know what happens next and you won’t be able to put it down . . . this was a wonderful read.”Elizabeth Provenzano, Tulsa Books Examiner

This is a fascinating story about how one decision can alter life forever.”The Portland Book Review

This ingeniously plotted first novel holds many surprises, not least of which is Jim’s ability to dial back his civilized persona, revealing the feral creature who emerges when his family is threatenedterrific.”Booklist

A thoughtful literary thriller, a good read for people who might avoid thrillers because they often contain clichéd dialogue, situations, or charactersDesinger’s book is free of these faults.”Newwest.net

As compelling as a whodunit mystery and will satisfy those readers attracted to smart, adrenaline-inducing plot, but the real heart of the book lies in the backstory about Jim and his wife and the trials they go through to answer the question: what is enough for a marriage? Only when their quiet existence is threatened do they each realize their value to each other.
Kevin Desinger’s seemingly effortless ability to juggle the past and the present serves the book well, and his subtle treatment of brutality is masterful. Desinger brings his readers to desperation and back, and we willingly follow; whether he’s describing violence, wine, or love, his hand is steady and beckoning.”ForeWord Magazine

"The Descent of Man could be used as Exhibit A in how to write a taut plot-driven story. The story catches you from the opening line and just never lets you go. If you’re looking for a fast beach read, look no further. . . What makes The Descent of Man a good read is that Jim’s actions and every decision seem so very plausible. It’s almost as if this could happen to each one of us. As his life spins out of control, it’s hard not to feel some relief in knowing it’s not you in that situation . . . a page-turner."MostlyFiction