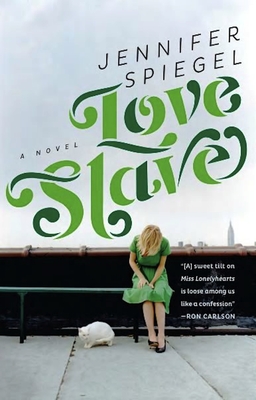 I can write the pants off any man, declares Sybil Weatherfield, the plucky hero of Jennifer Spiegel's Love Slave. A literary novel set in 1995 New York, Love Slave follows Weatherfield and her strange friends as they frustrate chick-lit expectations (though they're unaware that they're doing so) in this uproarious, genre-breaking spree. By day Sybil is an office temp, and by night she's a columnist for New York Shock, a chatty rag in which she writes a column called Abscess -- a wound that never heals. Her friends include a paper-pusher for a human rights organization, and the lead singer of a local rock band called Glass Half Empty. Full of cultural detail, mid-'90s observations, and early adulthood anxieties, Weatherfield's story of finding love ultimately casts an ironic eye on what it means to be a love slave.

Jennifer Spiegel teaches creative writing at Arizona State University. Her story collection, The Freak Chronicles, is forthcoming in June 2012 from Dzanc Books. Love Slave is her debut novel. Having received her MA from NYU, she lives with her husband and two kids in Arizona.
Loading...
or support indie stores by buying on