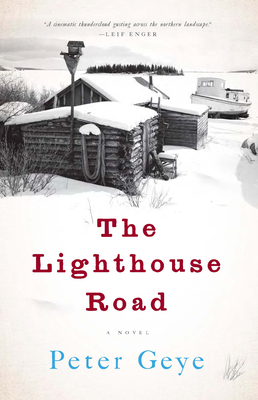 Against the wilds of sea and wood, a young immigrant woman settles into life outside Duluth in the 1890s, still shocked at finding herself alone in a new country, abandoned and adrift; in the early 1920s, her orphan son, now grown, falls in love with the one woman he shouldn’t and uses his best skills to build them their own small ark to escape. But their pasts travel with them, threatening to capsize even their fragile hope. In this triumphant new novel, Peter Geye has crafted another deeply moving tale of a misbegotten family shaped by the rough landscape in which they live--often at the mercy of wildlife and weather--and by the rough edges of their own breaking hearts.


Praise For The Lighthouse Road…

"Peter Geye writes with the mesmerizing power of the snowstorms that so often come howling off Lake Superior. I am in awe of how he swirls through so many years and juggles so many characters, all of them unforgettable and weighed down by secrets and regrets and desires that burn through the hoarfrost of Geye's bristling sentences." Benjamin Percy

Geye (Safe from the Sea) returns to his familiar setting, the unforgiving landscape of northern Minnesota, and brings the plight of Norwegian immigrants vividly to life. On a cold November in 1896, a son is born to Thea Eide, a cook in a primitive logging camp. She succumbs to fever, and the boy, named Odd, is left in the care of his guardian, Hosea Grimm. Grimm delivers babies, sets broken bones, and runs an apothecary in the town of Gunflint. As a young man, Odd despairs of ever getting away from Hosea and his other enterprises, bootlegging and prostitution, but he develops a plan: build and outfit his boat so he can escape with Grimm’s daughter, Rebekah. When Rebekah announces she’s expecting their baby, Odd accelerates their plans to leave for Duluth just as winter is setting in. He is able to provide for his new family as a boat builder, but there are no happy endings here, only resilience and resolve to carry on. Odd is determined that his son will not experience a loss as he did. VERDICT With spare realism, Geye puts a fresh spin on a familiar tale, rendering a powerful portrayal of family bonds in an era long past. Highly recommended. Library Journal

In his second novel, Geye brings the wilderness of northern Minnesotain a lumberjack camp and a small town and aboard a skiff riding the waves of Lake Superiorto crackling, thundering life. Handled less skillfully, Geye's emphasis on one primary trait in his characterstheir intense longing for somewhere to belong and, at the same time, somewhere to be freemight come off as one-dimensional, but here the story and its people achieve remarkable emotional resonance. The echoes of the characters' heartbreak through the generations are as haunting as the howling of the wolves on the wind.” Booklist, starred review

Peter Geye received his M.F.A. from the University of New Orleans and his Ph.D. from Western Michigan University, where he was editor of Third Coast. Also the author of the award-winning novel, Safe from the Sea, he lives in Minnesota.
Loading...
or support indie stores by buying on