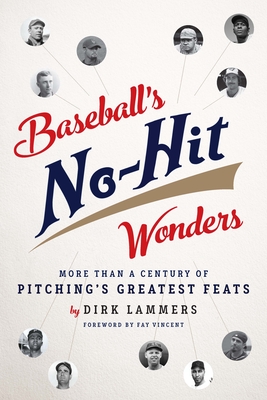 More Than a Century of Pitching's Greatest Feats

Baseball's No-Hit Wonders, with a foreword written by former Major League Baseball commissioner Fay Vincent, honors such legendary pitchers as Cy Young, Bob Feller, Nolan Ryan and Sandy Koufax, while introducing readers to other eccentrics and one-shot wonders who have thrown no-hitters. The book fleshes out the colorful characters, compelling narratives and statistical oddities from baseball's 294 no-hit efforts--as well as the many near misses that are also part of the national pastime's storied history. Painstaking research and personal interviews have allowed the author to pack great detail into a fun, fast-paced take on the game, revealing the stories of the no-hitter thrown by a pitcher on acid, the hitters most adept at breaking up no-hitters and other gems thrown by guys with nicknames of Bumpus, Bobo, Cannonball and Nixey. Even the game's greatest slugger is credited with a partial no-hitter, and all he did was throw a punch Chapters detailing the best no-hitters of all time are interspersed with Did You Know? lists that include no-hitters by team, city and day of the week, no-hitters of the Negro Leagues, catchers who caught the most no-nos and the best pitchers not to throw a no-hitter.

Dirk Lammers is an award-winning Associated Press journalist who for years chronicled the New York Mets' 50-year quest for the team's first no-hitter. He has spent more than two decades writing thousands of news stories and features for the AP and Tampa Tribune on a variety of topics including business, politics, technology, sports and entertainment. In 2008, Lammers tapped into his love of baseball to create NoNoHitters.com, a website dedicated to the Mets' seemingly futile quest for its first no-hitter. For the 41/2 years between the site's creation and Johan Santana's first Mets no-no in 2012, NoNoHitters.com blossomed into the Internet's online gathering point for all things related to no-hitters, garnering press coverage in the New York Times, the Wall Street Journal, the New York Post and more. He lives in Sioux Falls, SD. Fay Vincent served as the eighth Commissioner of Major League Baseball from 1989 through 1992.
Loading...
or support indie stores by buying on