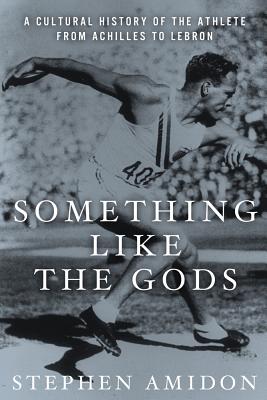 A Cultural History of the Athlete from Achilles to LeBron

A lively, literary exploration of one of the West's most iconic cultural figures—the athlete

Why is the athlete so important to us? Few public figures can dominate the public imagination with such power and authority. Even in our cynical times, when celebrities can be debunked at the speed of light, many still look to athletes as models for our moral and emotional lives. An aging fastballer goes for a few last wins in his final season, and he becomes an exemplar for our daily struggles against time.

A top golfer cheats on his wife, and his behavior sparks a symposium on marital fidelity more wideranging than if the lapse had come from a politician or religious leader.

Drawing from art, literature, politics, and history, Something Like the Gods explores the powerful grip the athlete has always held on the Western imagination. Amidon examines the archetype of the competitor as it evolved from antiquity to the present day, from athlete-warriors such as Achilles and Ulysses to global media icons like Ali, Jordan, and Tiger Woods.

Above all, Something Like the Gods is a lyrical study that will appeal to anyone who has ever imagined themselves in the spikes, boots, or sneakers of our greatest athletes—or wondered why people do.

Stephen Amidon is the coauthor of The Sublime Engine and the author of six novels, including The New City and Human Capital. He lives in western Massachusetts.

Praise For Something Like the Gods: A Cultural History of the Athlete from Achilles to LeBron…

“A brief but enlightening history of the athlete as a cultural icon...Amidon's broad historical sweep fascinates with its facts and challenges with its commentary...A cultural history of sports that says as much about all of us as it does about athletes.” —Kirkus Reviews