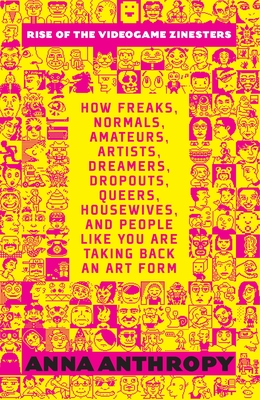 Rise of the Videogame Zinesters

How Freaks, Normals, Amateurs, Artists, Dreamers, Drop-outs, Queers, Housewives, and People Like You Are Taking Back an Art Form

Part critical essay, part manifesto, part DIY guide, and altogether unprecedented, Rise of the Videogame Zinesters shows why the multi-billion dollar videogame industry needs to change—and how a new generation of artists can change it. Indie game designer extraordinaire Anna Anthropy makes an ardent plea for the industry to move beyond the corporate systems of production and misogynistic culture and to support games that represent a wider variety of human experiences.

Rise of the Videogame Zinesters is a call to arms for anyone who's ever dreamed of making their own games. Anna’s guide to game design encourages budding designers to bring their unique backgrounds and experiences to their creations and widen the playing field of an industry that has for too long catered to an adolescent male consumer base. Anna’s newest game, Dys4ia, an autobiographical game about her experiences with hormone replacement therapy, has been featured in The Penny Arcade, IndieGames, and TigSource.

Praise For Rise of the Videogame Zinesters: How Freaks, Normals, Amateurs, Artists, Dreamers, Drop-outs, Queers, Housewives, and People Like You Are Taking Back an Art Form…

"When Anna Anthropy thinks of video games, she sees the potential to transform a genre. Anthropy show[s] us how the medium can be used for a greater good.” —Huffington Post

"Rise of the Videogame Zinesters is about education. It is a how-to, indie history lesson, design theory 101, a manifesto, and, surprisingly, as memoir. It serves as an entry into the importance of games and how to make them. But it also is about why making them for ourselves is important." —Popular Science

"Anna Anthropy's forthcoming book Rise of the Videogame Zinesters is about the personal potential of games—how simple tools allow all kinds of people to tell their own stories interactively. But it's also a clever, thoughtful examination on game design, and why the medium is important and interesting." —JoyStiq

"These days, everybody can make and distribute a photograph, or a video, or a book. Rise of the Videogame Zinesters shows you that everyone can make a videogame, too. But why should they? For Anna Anthropy, it's not for fame or for profit, but for the strange, aimless beauty of personal creativity." —Ian Bogost, Director, Graduate Program in Digital Media, Georgia Institute of Technology

"Free of the constraints the giant studios labour under, one- and two-person teams are using an artisinal approach to make deeply personal and innovative videogames. Rise is a great guidebook to understanding—and more importantly, participating in—this dynamically evolving culture." —Jim Munroe, co-founder of the Hand Eye Society and the Difference Engine Initiative

"Once upon a time, the game industry was a fervent of creativity, as innovators explored the potential offered by the new technology of home computing; today, it is a lackluster, thud-and-blunder torrent of commercial dross, selling to a diminishing audience of young males. Here, Anna Anthropy demonstrates how people from every background and walk of life are breaking free of the commercial cowardice of major publishers, and bringing their individual visions of the game to life -- and perhaps more importantly, pointing you to tools and ideas that will, should you so choose, allow you to create your own games. If game design is to be an art, as those of us who love games fervently hope, it must be rescued from its crushing commercial pressures. You can be a part of its future." —Greg Costikyan, Senior Game Designer, Disney Playdom

"Anna gives the world of video games a crucial perspective from her seat of authority within outsider culture, and illustrates how essential it is for the space to empower
voices of all kinds if it is to evolve."  —Leigh Alexander, game critic

"You would expect outspoken game designer and polemicist Anna Anthropy's first book to be controversial. You might not expect it to be so heartfelt—even inspirational. Equal parts autobiography, ethnography, and how-to manual, this book concisely makes the case for the unique power of "zinester" games—independent video games made primarily by one person. For newcomers to video games, it's a great introduction; for established video game designers, it's a wake-up call. If you're teaching a course about video game culture or video game design, this book deserves a spot on your syllabus." —Adam Parrish, NYU's Interactive Telecommunication Program (Tisch School of the Arts), and author of the ZZT game "Winter"

Anna Anthropy is a prolific game developer and critic and is the creator of Calamity Annie, Mighty Jill Off, and Lesbian Spider Queens of Mars among many other games, which are available on her website, www.auntiepixelante.com. She lives in Oakland, California, with her pet girlmonster and two lovely cats.
Loading...
or
Not Currently Available for Direct Purchase