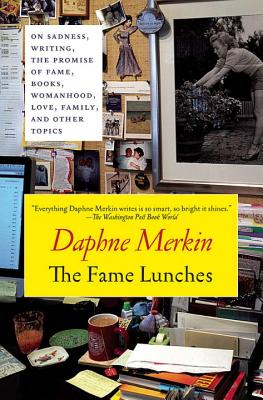 On Sadness, Writing, the Promise of Fame, and Other Imperfections

“Everything Daphne Merkin writes is so smart, it shines.”
—Washington Post Book World

“Merkin is blessed with the twin gifts of candor and restraint and with a supple prose style. She also possesses genuine chutzpah, bravely tackling extremely sensitive and complex issues associated with the arbitrariness and ambiguity of these fin-de-millennium times. An adept and intrepid interpreter of culture . . . Merkin's concentrated essays travel through the mind like meteors burning through the atmosphere: they give off a dazzling amount of illumination and heat.”
—Donna Seaman­, Booklist

“One of the few contemporary essayists who have (and deserve) a following.”
—New York Magazine

Whether her topic is psychoanalysis in the twenty-first century, Tom Stoppard’s heady plays, the semiotics of lip gloss, or the deadly seductiveness of fame, Daphne Merkin’s infectious warmth and curiosity have made her unique, even among masters of the modern essay. In The Fame Lunches, many of her most celebrated essays from The New Yorker, The New York Times Magazine, Elle, Vogue, and other magazines are brought together in a single shimmering collection. An indispensible book for anyone who loves a good sentence.

Daphne Merkin is a former staff writer for "The New Yorker "and has written regularly for periodicals like "Elle," "Vogue," the "New York Times Magazine," and the "New York Times Book Review." Her previous books include "Enchantment," a novel, and "Dreaming of" "Hitler," a collection of essays. She lives in New York City.
Loading...
or
Not Currently Available for Direct Purchase