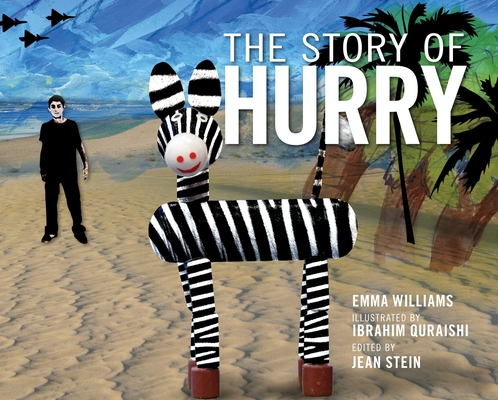 The Story of Hurry

After a major invasion of the Gaza Strip in late 2008, twenty-year-old Mahmoud Barghout decided to become a zookeeper. He saw that the children around him were exhausted by war, and so to provide respite, he set up the Happy Land Zoo. But the war made feeding and caring for the animals impossible—they died of thirst, hunger, or injury—and replacing them meant finding large sums of money and overcoming the blockade or the risk of bringing them in through tunnels connecting the Strip to Egypt. So Mr. Barghout came up with a solution for at least one animal: he dyed two local white donkeys with dark stripes, to create zebras, which visiting children could touch and even ride.

The Story of Hurry recounts the tale of these “made in Gaza” zebras, of an inventive zookeeper just like Mr. Barghout, and of the wondrous capacity of the imagination of children. Written by Emma Williams, together with thought-provoking mixed-media illustrations by Ibrahim Quraishi, this picture book for inquisitive children aged 3 to 103 includes an historical note for parents, teachers, and librarians.

Praise For The Story of Hurry…

"Between traditional folk tales and grim news coverage, there is a gap for families who feel their children should not be sheltered from the realities that Palestinian youth face, but also reject the missionary narrative that would paint them purely as victims. Hurry is a story of challenges and creative resistance that is both fantastical and grounded." —Innosanto Nagara, author of A is for Activist

"A powerful anti-war story in a modern setting." -Kirkus Reviews

A doctor and journalist who has worked in Britain, Pakistan, Afghanistan, South Africa, Jerusalem and New York, EMMA WILLIAMS studied history at Oxford University and medicine at London University. She has written for several publications about Palestinian-Israeli affairs and was a correspondent for the Spectator from 2000-2003. Her memoir of living in Jerusalem during the Second Intifada, It's Easier to Reach Heaven than the End of the Street, came out in 2006. Williams currently lives in New York City.

The recipient of numerous international grants and awards, including the National Endowment for the Arts fellowship, IBRAHIM QURAISHI explores visual performativity through photography, photo painting, video, film, installation, performance, dance, and theater. He lives in Amsterdam.
Loading...
or
Not Currently Available for Direct Purchase