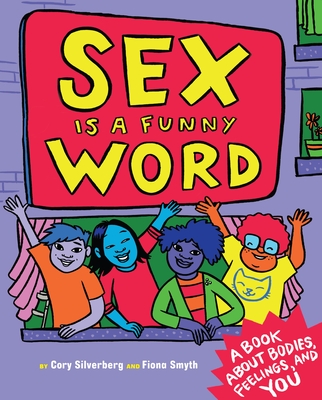 Sex is a Funny Word

A Book about Bodies, Feelings, and YOU

A comic book for kids that includes children and families of all makeups, orientations, and gender identities, Sex Is a Funny Word is an essential resource about bodies, gender, and sexuality for children ages 8 to 10 as well as their parents and caregivers. Much more than the "facts of life" or “the birds and the bees," Sex Is a Funny Word opens up conversations between young people and their caregivers in a way that allows adults to convey their values and beliefs while providing information about boundaries, safety, and joy.

The eagerly anticipated follow up to Lambda-nominated What Makes a Baby, from sex educator Cory Silverberg and artist Fiona Smyth, Sex Is a Funny Word reimagines "sex talk" for the twenty-first century.

Praise For Sex is a Funny Word: A Book about Bodies, Feelings, and YOU…

"Sex is a Funny Word is nothing short of revolutionary. Cory Silverberg and Fiona Smyth’s newest book is brilliant in its approach to giving caregivers and educators the tools they need to talk to kids about their bodies.... Though representation of many bodies shouldn’t be revolutionary, most of our media – children’s books included – showcases white, thin bodies in ways that are often ableist, sexist, homophobic, and trans-exclusive. In this way (and many others), Silverberg and Smyth’s contribution to the dialogue is revolutionary: finally young people have a way to see all bodies (including their own body) represented. Yes." —Kristin Russo, Buzzfeed

"Exciting, enlightening, and innovative, this book addresses timeless questions about sex for a new generation of kids who are increasingly aware of the broad spectrum of gender and sexual identities." —Clara Hendricks, School Library Journal, starred review

"Done with great sensitivity, precision and poise ... having access to a book like this could change the life of a lot of kids." —Feministing

"Silverberg is posing big questions at a crucial time ...[Books like his] represent shifting ideas and the inevitable parent-kid conversations around them." —Maclean's

"With skin tones in unlikely shades (blue! purple! green!) and wildly diverse crowd scenes, chances are good that any reader can identify with someone in these pages. Refreshingly, these crowds are diverse in a way that does not appear assembled by checklist. Lively design, bright, clashing colors, cartoon-style illustrations, comic strips, and plenty of humor support the informal, inclusive approach ... This carefully thought-out explanation may surprise but should be widely appreciated." —Kirkus Reviews

"You could send your kid to college and graduate school, and years of therapy, to learn how to lovingly come to terms with their gender and sexuality. Or you could simply read this book with them—it's that thorough, and that good." —Kate Bornstein, author of My New Gender Workbook

“Sex Is a Funny Word is a book that brilliantly reminds us of our shared humanity. Whether you are LGBTQIA or any other letter in the alphabet (including 'U' for undecided), this book contains everything you ever wanted the kids in your life to know about sex.“ —James Lecesne, co-founder, The Trevor Project

"I read Sex is a Funny Word with my 10 year old daughter who immediately got it! She saw herself, family, and friends in the characters. It's an amazing resource and makes what could be a difficult conversation, quite easy. I wish I had this book as a child." —Aiesha Turman, Founder and Executive Director, The Black Girl Project

"Yes, it’s written for 7-to-10-year-olds. But I’d like to see it on the required reading list for high school freshmen, college resident advisors, military personnel, early-childhood educators, coaches, clergy, police officers, pediatricians and parents. Did I miss anyone? ... the story begins not with body parts but with values: Respect. Trust. Joy. Justice. 'Justice is like fairness, only bigger,' Silverberg explains. 'Justice means that every person and every body matters.' Could we have that etched over every middle-school entry door, please? And while the chisel’s still warm, put it on the nation’s courtrooms, too." —Anndee Hochman, Broad Street Review

"Sex Is a Funny Word opens a portal to a world where gender is exactly what we say it is rather than simply the sum of our ‘middle parts.’ Silverberg provides the template for all of us to see the simplicity with which we can step out of today’s binary gender paradigm." —Aidan Key, founder of the Gender Odyssey Conference

Raised by a children's librarian and a sex therapist, CORY SILVERBERG split the difference and grew up to be a sexuality educator and writer. With an academic background in education and counseling psychology, he has developed and facilitated workshops for hundreds of agencies across North America, working on a range of topics including sexuality and disability, sexual pleasure, and sexual communication. He is the coauthor of The Ultimate Guide to Sex and Disability, and since 2005 he has worked as the Sexuality Guide for About.com. In 2012, Silverberg developed a book project—What Makes a Baby?—that became the best-funded children's book on Kickstarter. He subsequently signed a three-book deal with Seven Stories Press to produce a series of inclusive children's books about gender and sexuality. Silverberg lives in New York City.

FIONA SMYTH is a Toronto-based painter, illustrator, and cartoonist. Her first graphic novel, The Never Weres, was published by Annick Press in 2011. Fiona’s comic Cheez was published in Exclaim! magazine for almost ten years, and her comic Fazooz was in Vice for eight years. Fiona teaches illustration and comics at OCAD U in Toronto.
Loading...
or support indie stores by buying on