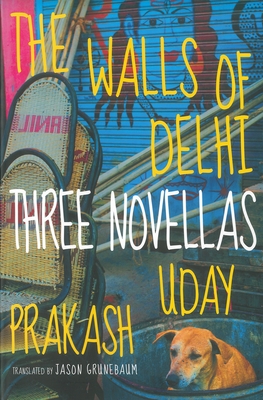 The Walls of Delhi (Paperback)

A street sweeper discovers a cache of black market money and escapes to see the Taj Mahal with his underage mistress; an Untouchable races to reclaim his life that’s been stolen by an upper-caste identity thief; a slum baby’s head gets bigger and bigger as he gets smarter and smarter, while his family tries to find a cure. One of India’s most original and audacious writers, Uday Prakash, weaves three tales of living and surviving in today’s globalized India. In his stories, Prakash portrays realities about caste and class with an authenticity absent in most English-language fiction about South Asia. Sharply political but free of heavy handedness.

One of contemporary Hindi literature’s most important voices, UDAY PRAKASH was born in 1952, in the remote village of Sitapur in Madhya Pradesh. A Communist Party member in his youth, he fled the region for Delhi during the India’s 1975-77 State of Emergency—though not before attaining with distinction his Master’s in Hindi Literature at Saugar University. Prakash has worked for a range of newspapers and television sources in Delhi, all the while publishing poetry and fiction to international acclaim. He is the recipient of the prestigious Sahitya Akademi award in India, and his 2013 novel The Walls of Delhi was a finalist for the DSC Prize for South Asian Literature. Also a filmmaker and a playwright, Prakash divides his time between New Delhi and Sitapur in Madhya Pradesh.

Translator JASON GRUNEBAUM's short stories and translations have appeared in many journals. His English translation from of Uday Prakash's Hindi novel The Girl With The Golden Parasol was awarded a PEN Translation Fund grant and published by Penguin India. He is senior lecturer in Hindi at the University of Chicago, where he also teaches creative writing.

Praise For The Walls of Delhi: Three Novellas…

"The narrative is hypnotic, not only in its ability to reveal socio-political situations and extreme poverty, but in the way it interweaves the stories with legends and then offers candid statements referencing world events that make the truth of the message of poverty and corruption very real." —Maya Fleischman, Foreword Reviews

"Delhi is not only the capital city of India but also, arguably, the space that best represents the bewildering confusion of a country at cross-purposes with its past and future, where thousands of different groups of people try every moment to negotiate survival, well-being, success, identity, relationships, and, most of all, shortcuts to wealth. Naturally, one individual's accomplishment is often another's ruination. The Walls of Delhi, a collection of three stories by Uday Prakash, captures this gestalt with scenarios that would be completely unreal if they weren't so plausible in the maelstrom that is modern urban India. In one story, a sweeper finds a stash of money hidden away by someone trying to evade taxes, using it to take his distinctly underage lover to Agra for a glimpse of the fabled Taj Mahal. In a second story, a Dalit—a member of the oppressed "castes" in India's repulsive but extant "caste system" of discrimination on the basis of a person's lineage—finds his identity stolen by an "upper caste" man who is trying to cash in on the benefits of affirmative action. And in the third, a family tries to cure a baby of its "illness" of extreme intelligence, represented by an ever-growing head. The fiction here is a fascinating projection of reality." —Words Without Borders

"You finish each piece and it’s like a slap in the face of realization at what’s just occurred, and you can’t even feel the full sting until the next day or the next week when your mind has had some time to fully digest everything that’s happened. These stories have sticking power." —Corduroy Books

"The stories in this collection should be read not only because they are coming from an extremely important voice in Hindi literature, but also because they are not just stories but a profound mapping of our times’ civilisational crisIs resulting from the blend of an awfully oppressive social order and brutal imperialism." —The New Indian Express

"Three...stingingly comic tales [with an] appealing mix of social realism and pungent sarcasm. Uday Prakash uses a kind of wry documentary style, combining incisive humour with gentle pathos, interspersed with occasional poetic passages, creating a new kind of narrative style that has been well caught by the translator." —Frontline (India)

"Uday Prakash writes of contemporary India with bleak and unblinking scrutiny irradiated by empathy and humanity. His mastery of metaphor and allegory and the power of his style invoke a timeless culture on the cusp of change." —Namita Gokhale, founder-director of The Jaipur Literature Festival and author of The Book of Shiva

"I am not particularly fond of literature that thrives only on cons of any society. Yet, although the individual stories build up on the painful and neglected aspects of Indian society, the collection as a whole stands out uniquely having a distinct and original voice. The characters are complete and very much human so that their tales keep lingering in the reader's mind even after finishing the book. In all three stories, the author has succeeded in exploring the grave subjects in an intriguing style of narration and with complete command of a language that disturbs the reader." —The Book Outline

"These are compelling stories, and with his often indirect approach—the narrator squeezing his perspective and person into the story, even if it seems to have little to do directly with it—Uday Prakash adds yet another interesting layer to the writing. The injustices described can be frustrating for the powerless reader, but the pieces certainly do impress." —The Complete Review
or
Not Currently Available for Direct Purchase
Copyright © 2020 American Booksellers Association